I decided to jump back into Diablo 3 again. My main reason for returning is to check out the new Necromancer. I waited until the beginning of Season 11 (just a few days ago) to take the plunge because I like the idea of starting fresh.

Since the Necro is the main reason I’m playing, I want to highlight a few of the things I really like about the class and where the game is at right now. 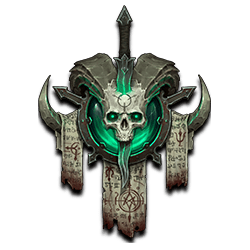 The Necromancer was one of my favorite characters to play in D2. I love pet classes and passives. Although the Necromancer is anything but passive, there’s still a nice element of sitting back and letting your skeletons smash stuff.

Necros use a resource called Essence, which must be harvested from corpses. The essence mechanic isn’t really different than any other expendable resource, but how it’s obtained is really cool.

When monsters die they leave a corpse that the Necro can utilize in a number of ways. Depending on your build, you might blow those corpses up with a nostalgic Corpse Explosion ability, or you might harvest them for essence.

This makes for a fun and unique mechanic for Necros that no other classes utilize.

The Necromancer is just perfect for Diablo games. We’re already talking about death, undead, demons, and the Lord of the Underworld here, so a Necromancer simply compliments everything about the game.

Necromancers look awesome. The style of their gear fits right in with the theme — especially Reaper of Souls.

My Necro Season 11 Gearing Up Build 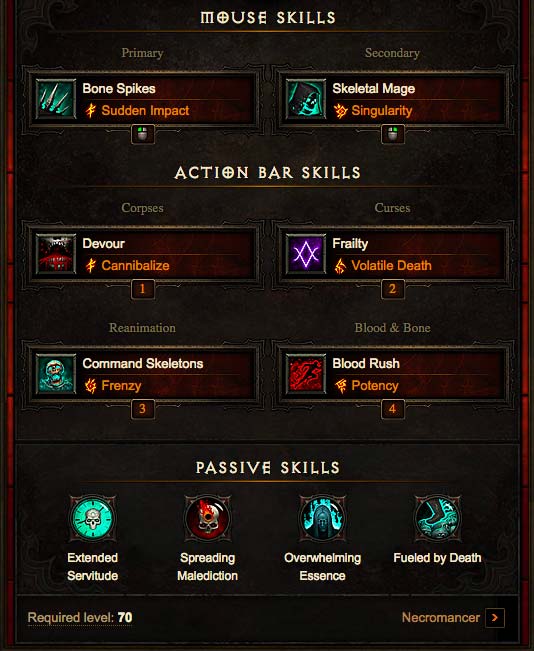 This is myÂ Season 11 Necro Gearing Up build that I use. It’s really straight forward minion build. The goal is to eventually roll into a very similar build using the Rathma set. I’ll post about that in the coming days.

This build uses a builder like Bone Spikes, and uses the standard Skeleton minions. A few key abilities below make up the build’s bread and butter.

Skeletal Mages (Singularity) – 3500% weapon damage for 250 essence. Mages wreck elites and rare mobs. The melt packs like butter too if I have my volatile death curse on a pack. Without these, I find my killing speed is really, really low.

Devour (Cannibalize) – Consumes corpses and restores 10 essence per corpse (and 3% HP with cannibalize). I use this to keep my Essence as high as possible in order to maximize my Skeletal Mages.

Frailty (Volatile Death / Scent of Blood) – Curses enemies in a radius killing them at 15% health. When they die, because of Volatile Death they’ll explode for 100% weapon damage. Doesn’t seem like a lot, but in packs this pretty much clears them all. Scent of Blood is a higher difficulty alternative to increase minion damage.

Leveling Up a Fresh Season Necromancer

Leveling up a new character can be daunting. I’ll be the first to admit that the prospect of 1-70 wreaks of burnout for me.

The trick that I found to level up quickly is doing Bounties. You might be tempted to run Rifts, but I really, really recommend Bounties for two reasons:

One main quality-of-life improvement that stands out right now is the crafting material tab. Instead of this crap filling my inventory or bank, it’s going into a special pocket/tab for materials and all stacking/registering as a number. If they could just do this with gems, that’d be nice.

I hit level 70 last night. I can easily clear Master rifts in a timely manner with crap gear, so I think it shouldn’t be hard to grind out my Rathma set.

We all know how this story goes: Play for a few weeks to a month, burn out of killing the same mobs over and over, and wait until another season. But at least this time around there’s a new class!