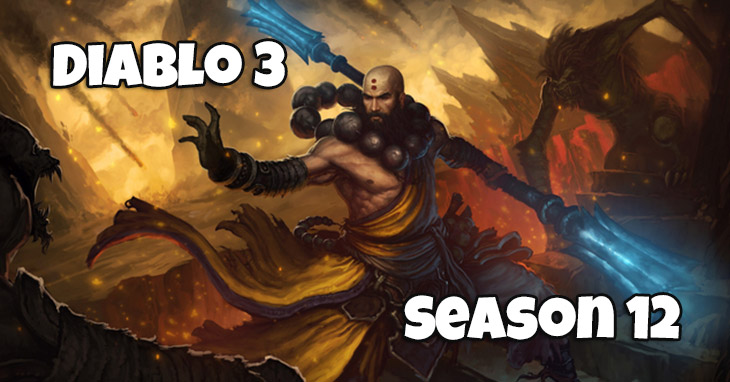 I needed a game to pass the time until Battlefront 2 comes out, so I decided to jump in a few days after the start of Diablo 3’s 12th season. For the uninitiated, a season basically means you start a character over at level 0 and play ‘fresh’. Each season tends to bring a patch to balance things, maybe introduce some new items, etc.

Season 12 did a ton to balance the classes in the game so that there isn’t such a disparity between “the best” and “the worst”. In other words, if you had to classify a ‘build’ as the “best” (let’s call it S Rank) and a class as the “worst” (F Rank) there would be several builds for each class closer to S than F.

That’s a big change from even just two seasons ago. Plenty of builds sucked and would never exceed Greater Rift 100. Totally different now, and instead of having to play a “good build” you can just play what sounds fun to you.

So, for the first time since Diablo 3 launched, I’m playing a Monk.

I was power-leveled to 70 (max level) in about 10 minutes thanks to sitting at the entrance while a friend clears T6 rifts. Now I’m gearing up to find the Sunwuko set so that I can use a Wave of Light build. It seems like the most fun to me. Lots of screen-clearing ability and capable of pushing GR115+, but that like I’ll ever see that. I’ll probably see 70.

Diablo 3 seasons tend to be 1 week endeavors for me. I find lots of gear, clear lots of grifts, and then decide I don’t feel like doing the “grind mobs mindlessly for small upgrades to min/max and optimize gear” game.

This time around, I think I’m going to start coining it the “3-Dayer”. The 3-Dayer actually has much larger application which I’ll post about in the near future.