We’re bigÂ Skylanders fans. We’ve played them all from day one. We even have week one footage of the original Skylanders launch on Youtube. The fanboy force is strong over here. We normally receive a review copy of Skylanders from Activision, but so far we haven’t received any SuperChargers. It got mailed late, right? It’s just lost in the mail and will be here any minute, right? Right? ::lower lip quivers sadly::

I posted last night about my dilemma over LEGO Dimensions. It’s expensive, it might just be another LEGO game, yada yada, but it’s LEGO and it has Gandalf and Doctor Who and who am I kidding I want it. Â The same dilemma exists over Skylanders SuperChargers. 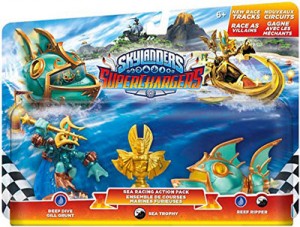 Sea Racing Action Pack: $35 (New tracks like a Mario Kart circuit, a vehicle, and a Skylander)

There are also “Dual Packs” with a character and a vehicle coming in around MSRP $25 but those have a release date in October. As always, Skylanders are releasing in waves. Wave 1 will have like 4-6 characters and vehicles, wave 2 adds more, etc.

Predicament: Skylanders Wii U vs. PS4 (or Xbox One) 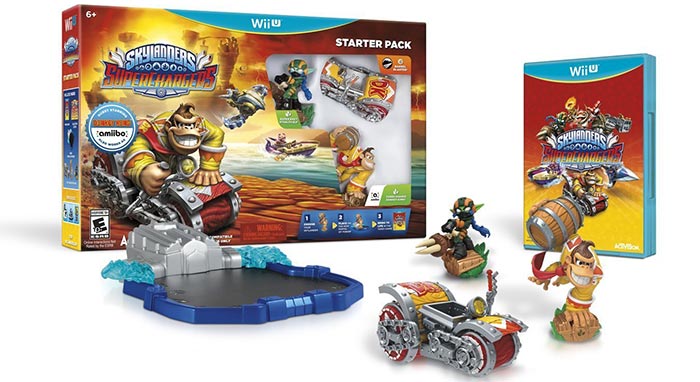 SuperChargers on Wii U allows you to play Bowser and Donkey Kong Skylanders which are ALSO Amiibo! Are you freaking kidding me. Genius and insidious in all the right ways. The Wii U version of the Skylanders SuperChargers Starter Pack comes with Donkey Kong, and the 3DS version comes with Bowers. The Hybrid Amiibo/Skylanders do not work on PS4 or Xbox One, so that’s a huge swing to the Wii U side of the fence.

There’s this question as to whether or not the Wii U version looks inferior, but from all of the videos I’ve watched I can’t tell a difference. Anyone out there have a comparison video or own a Wii U copy and see a huge difference?

SuperChargers Has Online Co-op and Racing

Here’s where this gets even harder for me. Skylanders SuperChargers introduces a new mode for racing vehicles that is very similar to Mario Kart; Oh, it’s also online competitive play. Awesome. They also have online (and couch) adventure mode co-op (play the story with friends) which is … yeah, that’s awesome too. Graev and I could play together which is always a HUGE plus for us.

When all is said and done, I’m probably sitting at (including tax) $180 of Skylanders Superchargers stuff that I want.Â Whew… But it has multiplayer co-op for the story and competitive racing. Â The struggle is real on this one. Have any of our readers out there already bought Skylanders Superchargers? I know some of you have “kids” who like to play. Wink. wink.