Stealth is an interesting mechanic; some people despise it in all forms, and others won’t play without a class that can stealth and sneak around.Â  I’ve had those moments where I hate stealth and the people at the controls.Â  I can remember as far back as DAoC (the first game I truly got into PvP) when I would be straggling behind the herd and suddenly I’m dead.Â  I was killed by a stealth character.Â  Being stun-locked in WoW sucked.Â  I also have memories of being a stealth Scout archer and being the player who reports enemy movements, and being able to move into position and shoot arrows at unsuspecting targets.

I think stealth is a positive addition.Â  Stealth adds depth to combat, and provides alternative ways to play.Â  Those are ‘good’ things that MMOs need more of instead of this massive homogenization of roles and play-styles.

There are three things that I personally think are wrong with stealth or that should not be allowed: 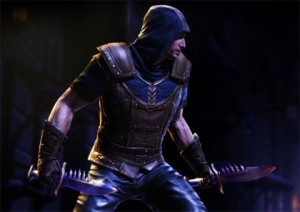 To improve stealth, I would make it more of a recon tool or a positioning tool, and preserve the ‘coolness’ and ‘style’ it brings (See TF2 Spy or the cool guy on the left).Â  A ranger should be able to traverse through a forest and be less visible than other classes.Â  That makes sense to me.Â  So why not let ranger-like characters get a form of stealth or invisibility near trees until someone gets close?Â  Holding still could make them harder to detect, and moving makes it easier.Â  A similar system can be implemented for sneaky rogue characters.Â  When stationary, let them have a form of stealth — let it be permanent.Â  For stealth while moving, have it be temporary and easy to reveal if they get too close.Â  For all of the classes that use stealth, their core abilities should be usable when breaking stealth.

Even though I rarely play stealthers, and I end up hating them because they often counter my play-style, it’s a feature that belongs.Â  That’s a pretty big change from my opinion on the subject back in 2008, but I’ve really learned a lesson about how important it is to preserve good ideas and improve them.Â  Stealth is a classic, and the ‘coolness’ of a rogue should be preserved.Â  I would like to see creative ideas used to improve stealth instead of just losing the feature entirely because it has issues in its current, traditional implementation.