We got into the Ghost Recon Online Closed Beta recently.Â  GRO will be a Free to Play FPS game, which made me extremely hesitant to even care enough to download the beta; However, I’m extremely glad I did because GRO is one of the higher quality first person shooters I’ve played in a while.

The standard FPS features are all present.Â  You can progress, unlock gear, match-make, etc.Â  The graphics are great and the quality is polished up.Â  What I want to emphasize about the game are the features that are unique to Ghost Recon Online as well as what I think the game does very well.

Movement happens from a third-person perspective allowing for a different feel than a typical Call of Duty experience.Â  Using the spacebar while sprinting (shift) allows you to slide, even into cover.Â  The cover mechanics are well done.Â  Pressing space bar against almost anything allows you to stick to it and move.Â  When you reach a corner or edge of the object you are covering behind, press the right mouse button to zoom in and ‘peak’ out.Â  Using your mouse, if you try to aim around the object (a natural tendency), unlike some games where your body slides out from cover you actually lean further out instead.

Crawling, kneeling, peaking, covering, vaulting over, and sliding, are all present.Â  GRO’s movement capabilities are usually reserved for single-player games and rarely brought into the online competitive scene.Â  I want them in all of my FPS games from hereon out.

Gameplay is slower and much more tactical.Â  The whole point is to play as a Ghost squad.Â  Maps are designed for advancing or holding your ground, which allows every kit to hunker down and wait rather than run and gun.Â  The way the guns feel, and the way the game favors stationary shooting, it’s in your best interest to advance cover to cover.

I think the guns feel much better than Battlefield, but maybe not as good as Call of Duty.Â  Spraying, at least with the guns I used, wasn’t efficient.Â  I preferred to switch to semiauto mode and pick away at targets since I could retreat to cover easier.Â  Spraying was affected heavily by recoil.

Cash Shop and the Future

I don’t know what the Cash Shop will bring for the future of GRO.Â  You can definitely by guns and gear, but you can buy them with points you earn while playing instead of spending real money on them.Â  Clearly there are “pay to win” elements in there like “Magnum ammo” (pictured below) that increase the damage your guns do, but they too can be bought with in-game points.Â  I really hope they don’t ruin the game with the shop because this is a game I would buy. 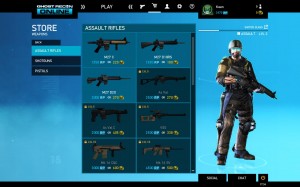 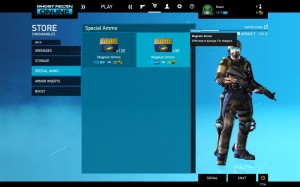 Below is a video I took while playing today.Â  I’m not very good, but I show some of the movement, peaking, and gun mechanics.

I highly recommend the game in its current state. I’ve been having a lot of fun and can’t figure out why this game is going free to play when the quality and gameplay are shockingly good.Â  Visit the official site and sign up for the beta.