We’re excited to reveal a first look at one of the games we’ve been developing this summer.Â  What’s this? Keen and Graev making video games?Â  Yep, we formed our own little company and we’re hard at work on several games.Â  We’re not ready to reveal a title yet or too many details, but we wanted to give you guys a quick look at some screenshots and provide a general idea about one game in particular.

Our game (title not released yet) is designed to be like and follow the rules of a classic adventure game. Many of you may not know what that means since “adventure game” no longer means the same thing.Â  King’s Quest, Space Quest, and Monkey Island are but a few games that you may recognize and we encourage you to google for details or buy them for yourself. Â  Adventure games are very story driven with puzzles and a little bit of thinking required.Â  Many times there are intellectual challenges and puzzles to overcome as well as items to collect and places to unlock.

Platform: iPhone first followed by iPad.Â  We decided that it would be easiest for us to FIRST distribute through the App store and then release it to PC and Android once we have a better grasp on the languages we want to code our game in.Â  Eventually we hope that our game will be multi-platform.

Gameplay: Character(s) movement will be controlled via on-screen touch pad similar to the oldschool King’s Quest.Â  Interacting with NPC’s, items, objects, etc., will happen by simply touching the screen.Â  In one of the screenshots below you can see our HUD which has 6 buttons: Look at, Talk to, Pick up, Use, Give, and the Inventory.Â  To give you an idea of how the gameplay will go, imagine walking around until you meet a NPC.Â  You walk up to that NPC and touch the “Talk to” button, then touch the NPC.Â  A dialog tree then opens. If you need to give an item to the NPC, you’ll press Give, then open your inventory, touch the item, and then touch the NPC.Â  This should feel very familiar to oldschool classic adventure veterans.

The game will mostly play out in what feels like isometric 2d. We’ve kept to an art style we enjoy that is vibrant, fun, and inviting. Â  Expect the setting to be fantasy with a twist and your adventure to be full of humor and exploration. 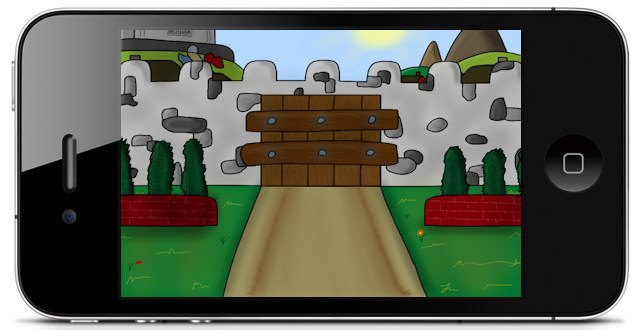 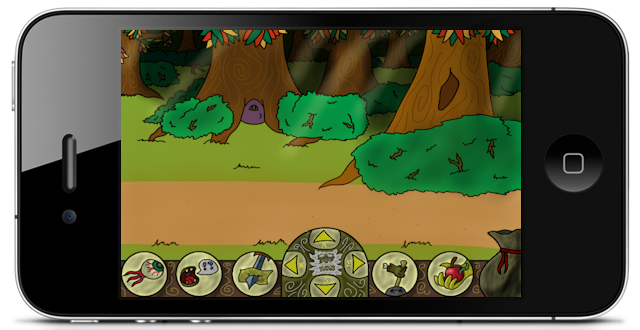 These are exciting times for us.Â  We’re excited to reveal actual gameplay video footage as well as the title, characters, and story to you soon.