Interested in Cataclysm at all?Â  The events leading up to The Shattering are starting to ramp up.Â  Over the past couple of weeks it started with a few words being spread by cultists and now it’s full blown elemental invasions into Orgrimmar and Thunderbluff.Â  Every couple of hours rifts will open and the cities will turn into events where the various districts are invaded and you have to destroy elementals. 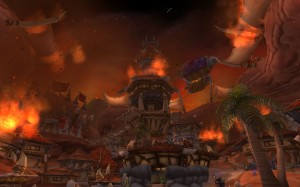 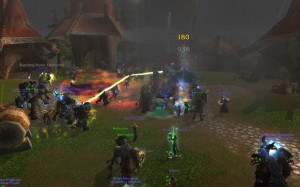 After the elementals are slain, the rifts remain open and you’re able to queue with a party to fight a few familiar faces: Princess of Maraudon, Gahz’rilla of Zul’Farrak, Prince Sarsarun of Ahn’Qiraj, and Ambassador Flamelash of Blackrock Depths.Â  They’re a bit tougher though, weighing in at level 80 with a lot of HP.Â  They drop decent ilvl 251 loot and are quite fun.Â  They’re only available for a short time after their respective city invasion ends, so hop on and do them while lots of people are participating.Â  There is an achievement available for you if you close a rift of each type.

These invasions aren’t all.Â  If you haven’t been playing the past two weeks you’ve probably missed out on some interesting (not fun, but interesting) quests where you go to Nagrand to speak with Thrall.Â  He’s gone to commune with the elementals to find out what is going on.Â  Garrosh is already well situated in Orgrimmar too. Â  There’s also some background on Cho’gall in the twenty or so quests that you can find outside of Org bank.

The rumor right now is that the Shattering will come next Tuesday.Â  That’s exactly two weeks until Cataclysm, but they might delay it until the 30th.Â Â  I’m just anxious for something to do in the game again.Â  Right now I’ve run out of reasons to log in — well, I did until now that the invasions are happening.Â  Even so, I’ve done it all in one day and now I’m waiting seven days for the Shattering (hopefully not 14 days…) and just counting the hours until I can begin playing a goblin.