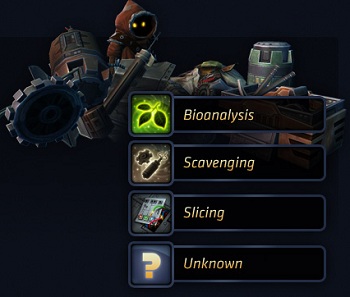 Something worth talking about — finally! It feels like all I’ve come across in the past week is news about EVE or Champions Online. It’s been awful. Massively put up an interview with Daniel Erickson where he is hopefully –accurately– clarifying some of the gray areas of the crafting system in SWTOR.Â  If you’re unaware of my previous concerns with SWTOR’s Crafting system, I’m basically worried about it being too automated where the player is not as involved as he/she should be in order to validate the experience.Â  IF the player doesn’t actually have to do anything then what’s the point of being a crafter? I’m also worried that players who choose to make crafting their main vocation won’t have enough recognition for their choice which results in crafting being something that no one does or that everyone does if there are no barriers to entry.

In the interview, Erickson makes a few points:

Lastly, here’s a point that always makes me raise an eyebrow thinking, “are you sure you want to say that?”

I’m going to hold them to that one.

Overall, this sounds good based on how it is being presented on paper.Â  Crafters get to specialize and set themselves apart, people can supply crafters with goods, crafters get rare schematics/recipes, it’s still possible to do it oldschool, it uses a similar system to SWG’s factories, and it sounds like they’re trying to make it less boring and more about running a business.

I get the impression that I’ll be able to choose skills for my companions (and myself?) that directly improve or favor crafting.Â  I can provide a schematic and materials to my companions and tell them that I want them to make 15 of the item and set them to work.Â  I can then go out and gather more materials or do some hunting and come back to check on their progress like I would workers in a store.

Update: See my comment below. I really don’t know what to think now after watching the crew skills video. I still like a lot of this but I’m worried it will just be something everyone does for themselves, thus diminishing the value of the social and economic benefits.