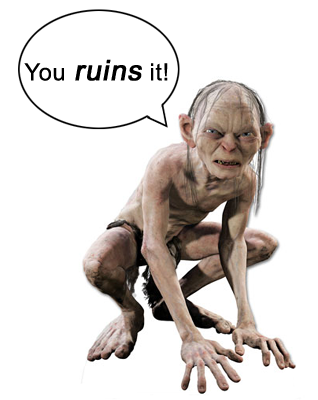 A massive blow was dealt to fans of MMORPG’s today as Turbine announced that Lord of the Rings Online will be going Free to Play.Â  This is terrible news for not only fans of the game but for those fighting hard against the insidious microtransaction disease plaguing this industry.Â  Lord of the Rings Online was one of my favorite AAA titles of the past decade and always remained a blemish of regret on my record as a game that I wish I had never quit, but did so reluctantly after playing long enough to see all of the content.Â  That is enormous praise coming from me and a problem that more games can only wish to obtain.

LotRO is now destroyed by an illogical act and remarkable ignorance.Â  To take a game that has lasted this long, with numerous expansions, no server merges, top notch story and content, and essentially throw it into the fires of mount doom is unfathomable.

Let’s make a short list of some of the heinous acts Turbine is about to engage in:

What a terrible mistake that you should be downright ashamed to be associated with, Turbine.Â  I really feel for the players who actually stuck with the game the whole time — players that I used to envy — because your game has now been turned upside down on you.Â  I also feel for those of you who ardently defended your LIFETIME SUBSCRIPTION and are now being reduced to a monthly stipend of Turbine Points.

LotRO had one of the tightest communities we’ve seen post-SWG/EQ era, especially on servers like Landroval.Â  Your communities will now be inundated with the free-to-play crowd which will infiltrate and destroy you from within.Â  I hope this destroys the game so that Turbine, and the rest of the industry, learn a lesson that should never have been necessary.Â  Find yourselves a new game, LotRO fans and community.Â  Find one that deserves you because you really are a good lot.

It’s scary to think that one of the stronger AAA subscription models could fall victim to the F2P model.Â  Greed is a powerful tool among weak minded executives who know nothing about gaming or the cultivation of a successful MMO; ironically something that would make them richer if only they understood it.Â  Was it Warner Brothers’ doing? I don’t believe so.Â  I think it was in response to the DDO garbage showing them an immediate increase in revenue.Â  Turbine CEO Jim Crowley is making some lame excuse about how players want “quality entertainment” they can experience at their own pace, but I call bs on that one.Â  This has nothing to do with the true fans of MMORPG’s or of your game, Jim.

Don’t give in to this attack on our hobby.Â  If you’re a fan of how MMORPG’s have been for over a decade — the real MMORPG’s and not the Farmville generation — then fight back and turn your backs on them and share your disgust.Â  It certainly won’t stop them from taking the path of least resistance to a bigger pay check, but it will encourage those with a true passion for designing games that the REAL PLAYERS want to continue pressing forward.