Happy Fun Guyz completed our first raids this past week.Â  We started with 10 man Naxxramas and downed nearly all of the bosses (skipped a few in the middle when time was slipping away from us).Â  We then went on to complete all of 10 man ToC and Onyxia 10. 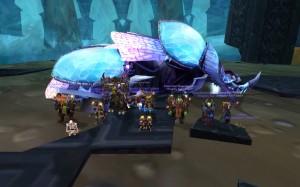 This was my first ever trip to the ToC raid.Â  It’s really well done.Â  I often write about how raids should be against big bosses without the pain of trash mobs and time sinks.Â  ToC brings the bosses right to you without any busy work kills.Â  The bosses are all real big and have their own mechanics — no tank and spank.Â  I was really glad to see that Anub was brought back at the end as a boss fight worthy of his name, instead of just a 5-man dungeon that level 72’s can kill.

Onyxia was her classic self with a couple of minor changes.Â  Deep breath does -not- compare anywhere near what it was in her original counter because several of us were hit and didn’t come close to death.Â  Even the 25-man version is the same way (Watched Graev do it).Â  The Dragonkin adds that come with the welps are a pain, but it gives the melee a little more to do.Â  During our fight we actually had someone knocked into the welps mid phase 3 which was an added difficulty.

For our raid to be comprised of mostly people who started 100% fresh chars and worked their way to 80 in this short a time, with this amount of success (Anub and Ony downed first try along with several other bosses) is really great.Â  We plan to continue clearing ToC 10 and other raids weekly and tackling the first wing of ICC 10 within a week or two.Â Â  As always, we’re recruiting players who love to have a good time and work as a team.Â  You can visit our forum to introduce yourself.