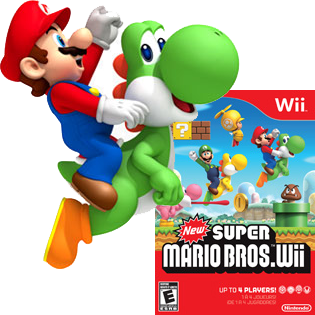 We picked up the New Super Mario Bros. Wii yesterday and it’s a blast!Â  It brings back the olds feel of Mario with a new “Wii” feel.Â  That Wii feel is best described as a tad more lighthearted and spry.Â  It’s also kinda difficult at times.Â  The first world is mostly very easy but when you get to the second world the difficulty definitely picks up a noticeable amount.

The game is a sides-croller and really is very similar to the older Mario games.Â  There are all the same powerups and more including the propeller hat, which is weird but useful to get to those high places, and the Freeze fireball flower which lets you freeze stuff.Â  Those are the only new ones we’ve found so far but I know there are more.Â  There are the same bad guys, the same little secret blocks in conspicuous locations, obvious and not so obvious hidden areas, and the usual.Â  On each of the levels there are 3 big gold coins to collect.Â  Admittedly I do not know why we’re collecting them, but we were told “You collected all of them!” after we finish a world.Â  Maybe we can buy stuff with them?

Other than being very similar to the old games, but new, the coop play is the main reason why the game even appeals to me.Â  It’s a lot of fun to play with someone — probably more fun than being alone… but I think it also adds to the difficulty.Â  Okay, so I have a problem… I like to jump on Graev’s head and make him fall.Â  I also like to pick him up and throw him off cliffs, throw shells at him, and zip forward so fast that I progress the screen and watch him die.Â  I have moments of schadenfreudeÂ  that get me busting up laughing as I totally kill Graev on not on purpose as he’s about to get an item that I wanted…

It’s the first Wii game I’ve played in a long time which normally would say something, but it doesn’t since the Wii needs more titles — even if they’re rehashing an old idea with new tricks.Â  It’s fun, pick it up!