Halloween marks the end of a season, in a way.Â  When it comes to MMO’s, their launch schedules, and lifespans, Halloween always has a way of being important.Â  For many games it has been the dreaded day of death where subscription numbers begin to fall and others it has been a milestone of excitement.Â  Let’s hope that this next seasons (Halloween to New Years) is a fantastic one for everyone. 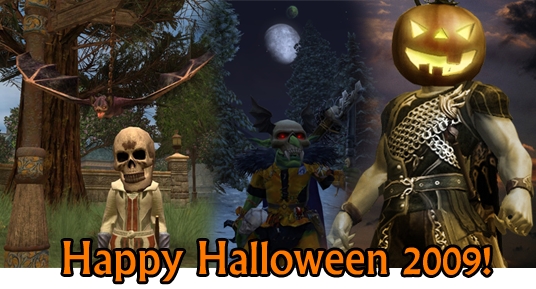 Where will we be in 2010? We hope that you’ll continue to stay with us to find out. 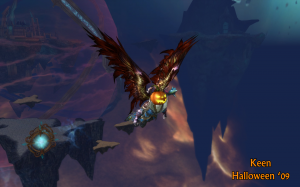 The Halloween event in Aion was a little disappointing.Â  I was hoping to see lots of decorations around Pandaemonium and a spooky atmosphere with some in-game events going on but the in-game Halloween celebration amounted to simply receiving treats sent in surveys.Â  I like the treats, especially the fantastic looking Pumpkin Head Hat, but a little more would have been nice.

Since I’m playing Fallen Earth as well, even as a free 15 day trial, I’ll mention that their event was a little lackluster as well.

My favorite Halloween events are from The Realm and EQ2.Â  Someone will hopefully top those one day.