I haven’t been the biggest fan of the Warhammer Online live events.Â  The event for the new tank classes was pretty good because it offered the new scenario to play in but other than that it was more of a trial run for how the rest would play out and it sorely lacked any quality objectives.Â  The Halloween live event introduced the renown into RvR lakes in its first incarnation but again suffered from poor objectives.Â  The holiday event was probably the worst of all because the objectives were tedious, boring, and not worth the rewards at all.Â  When I logged in today to give the Valentine’s-esque event a try I wasn’t expecting much at all.Â  Surprisingly, the event is actually pretty good.

The “Mark” that players get over their heads has created quite the interesting effect.Â  Players with the red mark above their heads are targeted and focus fired – or rather simply zerged – by everyone because they are the objective of a “kill 5 marked players” repetable quest.Â  This has had an effect two-fold.Â  In open-rvr it’s actually getting some groups to fight each other, and in scenarios it’s causing people to focus fire like never before.Â  The funny part is when the mark gets onto a tank…okay, it wasn’t funny at all actually.Â Â  In this one Serpent’s Passage today we had 3 level 40 Black Orcs with shields marked and our entire team spent the whole 15 minutes trying to kill these B’Orcs, leaving their healers to sit back to die from nothing but laughter.Â  Chalk that up to horrible players, but overall the mechanic is an interesting one in RvR and it’s made an impact, however slight, on how fights are playing out.

The objectives for these event are pretty good too.Â  In less than an hour of RvR my log looked like this: 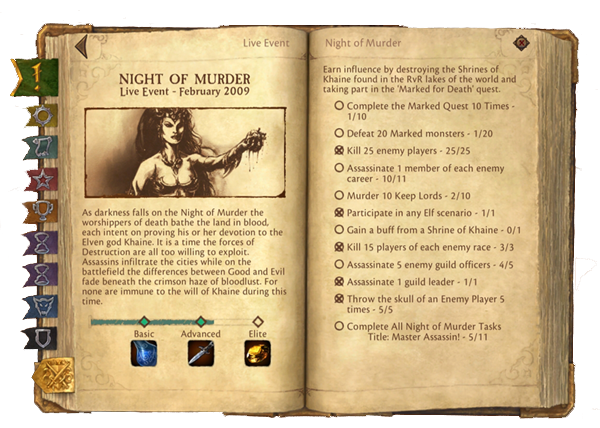 You’ll see that I’m well over halfway through the event influence bar and I’ve completed several of the objectives.Â  After this screenshot was taken I completed the officer kills, class kills, and Shrine of Khain buff.Â Â  The objectives have been easy enough to do while doing my regular RvR which was really nice, because it didn’t add anything that would sidetrack me from doing what I wanted to do, rather it rewarded me further for it.Â  I also liked how this event, like the Halloween event, added a mechanic to the game that made fighting interesting.Â  Maybe Mythic can expand upon the “marked” mechanic and add it to the game like they did with the RvR influence.Â  If anything, this event has shown that changes to the RvR system are welcome and helpful to liven things up.

If Mythic can do the next few live events like this then they should be pretty fantastic.