While playing The Division yesterday afternoon, Graev and I discussed how we feel that integrated multiplayer is definitely the future for console games. The industry has dipped its toe in…

Keen and I picked up Cube World yesterday. Like Minecraft you can purchase now and gain access to an alpha build. So far from what I've played, and have heard… 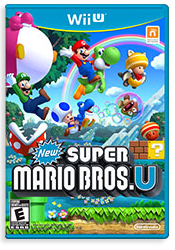 New Super Mario Bros. U finally brings back the Super Mario World style of play.Â  And for the first time ever, Mario is available in glorious HD — and he looks dang good!

If you’re familiar with any of the ‘New’ Super Mario Bros. games, or any of the side-scrolling Mario games of the past, there isn’t a whole lot to tell you about.Â  A few new power ups like Balloon Yoshi and Flying Squirrel Suit give the game some new strategies, but the real meat of the same is simply taking Mario on a new adventure.

The ‘World’ style of play means you get a big over-world map of levels that you unlock in sequence, with only a few alternative paths giving a couple of options of which way to go first.Â  Around the map will be shortcuts, secret level/path unlocks, Toad huts, Baby Yoshi’s (with their own types of power ups), and new challenges to beat.

Read our full review of New Super Mario Bros. U after the break. END_OF_DOCUMENT_TOKEN_TO_BE_REPLACED

Starhawk released today exclusively for the Playstation 3!Â  Starhawk is a third-person shooter with a setting that reminds us of Firefly — that wild west in space vibe.Â  It’s the future, and Humans have colonized other planets. The game takes place in a colony aptly named ‘Frontier’ where miners have been affected by a powerful substance known as rift energy.Â  This energy has transformed some of the miners into mutants who are protective of the rift energy, and the natural conflict for game is established.

Unlike its predecessor Warhawk, Starhawk has a single-player campaign.Â  We’ll update this with our impressions once we’ve finished the campaign, 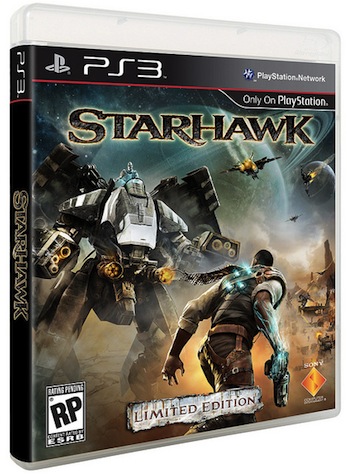 but for now we’ll say that the single-player feels very similar to multiplayer in that the player is given multiple ways to tackle a problem.

Multiplayer is the heart and soul of Starhawk.Â  Players can compete in 16v16 matches of CTF, zone control, and other common multiplayer modes.Â  These maps are ginormous to accommodate Hawks, the mechwarrior/transformer/Warhawk machines that define the gameplay in Starhawk.Â  The gameplay hasn’t changed much from the Warhawk days; Players fly around in highly maneuverable Hawks, on the ground in tanks and vehicles, or on foot with a very familiar multiplayer shooter feel.

Build & Battle is what makes Starhawk unique.Â Â  As you play you earn rift energy that you can spend like currency to call in drops from the radial Build & Battle menu.Â  You can call in walls, turrets, supply depots, vehicle bays, and change the course of battle through strategically utilizing rift energy to give you and your team the advantage.

Gameplay is chaotic, unpredictable, and crazy polished.Â  Flight feels amazing, gunplay is solid, and the Build & Battle system makes each map feel different because players may defend their flag differently or build up their base differently every match.Â  There’s so much being done in Starhawk that we wish would be brought to the rest of the shooters on all platforms.Â  (Part of me dies thinking about how awesome this would be on PC. -Keen)

Read on for more of our review! END_OF_DOCUMENT_TOKEN_TO_BE_REPLACED 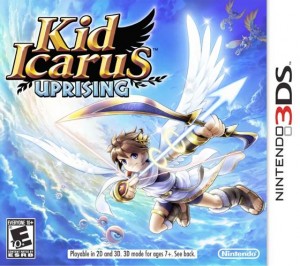 I remember seeing Kid Icarus Uprising around the time the 3DS was first announced. It looked totally awesome and I was really excited to get my hands on it. Unfortunately it seems to have taken pretty much a year into the 3DS’s life cycle before it actually came out, but I would say that it was worth the wait.

I never had the opportunity to play the original Kid Icarus until recently; about a week ago. Prior to that my only experience with Pit (The main character of the series) had been in Super Smash Brothers Brawl. Apparently there was also a GameBoy game, but I’ve never played it. From my understanding, Uprising takes place 25 years after the events of the first game. Medusa has risen again and is causing trouble and what not, so Pit has to battle the forces of evil with the help of his deity/leader Lay Palutena. The story is presented pretty simply and is easy to get into. So far it seems ever line of dialogue has voice work, which is nice, and the back and forth between Pit and Palutena is enjoyable and often funny, with several references back to the original game and even some that break the 4th wall. It’s the kind of stuff that really amuses me, so I enjoy it quite a bit. The game looks fantastic, too. It’s hard to believe that the 3DS can pull off visuals like this. It’s hard to say whether or not it’s the best visuals, though. Resident Evil Revelations still might take that title, but Kid Icarus Uprising is right up there.

The game is laid out into a specific format that slightly resembles that of the original. Each chapter begins with a flight stage, where Pit flies through the air in an “on rails” fashion. The player has control over his movements and attacks, but no real control over where he goes. The second phase is on land and sees pit battling against enemies, finding chests, and making his way towards the boss. These tend to be fairly linear with a few secret areas here and there. The final phase is where you face off against the chapter boss. The game also has an really interesting Intensity feature. Before each match you can spend hearts (the game’s currency) to increase or decrease the game’s difficulty, or “Intensity” as they call it. With higher intensity comes more monsters, but also better rewards. If you die during a chapter your intensity level drops and you lose a portion of the hearts you wagered. It’s a really fun and interesting mechanic that can offer a good amount of replay value, especially when some levels feature side areas that require a certain Intensity level to even access.

END_OF_DOCUMENT_TOKEN_TO_BE_REPLACED

Red 5 Studios has finally revealed what they have been working on:Â  Firefall.Â  It's a " team-based action shooter combining deep character progression with an open-world cooperative campaign that can…