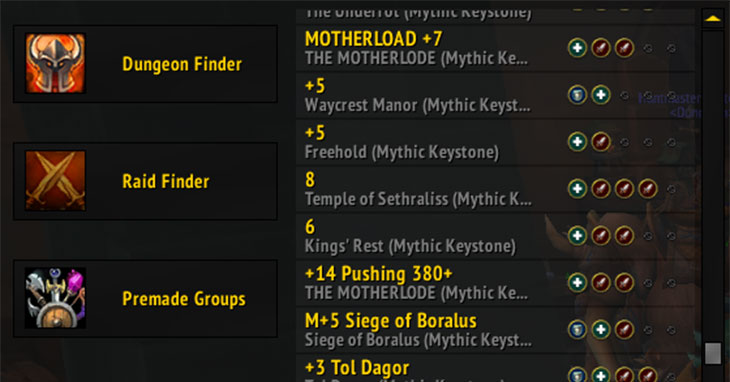 I was watching a video about an upcoming MMO and it was talking about the grouping experience and how it wouldn't have the Dungeon Finder mechanic of putting you into a random group and teleporting you right to the instance. Instead, you would need to do the traditional LFG process of finding people, forming the group, running there all manually.

A lot of people will say that the LFG process is dead and long gone, meant for an older generation of MMORPG. They'll say that LFG is tedious, etc.

Playing WoW for the past 6 months  has shown me that the LFG model is actually alive and doing quite well. Though the pioneer of the aforementioned Dungeon Finder, WoW still utilizes the LFG system for its core gameplay.

Dungeon Finder is only present for the lowest tier dungeon gameplay in WoW. In fact, that gameplay is so low that most people skip it entirely with the plethora of other gearing options in WoW's latest expansion, Battle for Azeroth.

If you're looking to do any meaningful content, you must form the group yourself. What does that look like, exactly?

In WoW, there is a tool that allows you to list your group in the UI and allow people to browse. They can then apply and be approved or declined -- usually based on their gear.

How is this different from old school MMORPG's and their LFG?

Simply put, it's not much different at all.

In older MMORPGs, like EverQuest, we would simply use a chat channel and advertise our intentions. Sometimes we might even go to a particular location and ask a group already there if they would have an opening soon.

Yesterday in WoW I spent an hour LFG. That sucked just as much as waiting an hour LFG in EverQuest or any other old school MMO.

The automated, instant, and and "random" grouping is an illusion if used as a reason to discredit another MMO's accessibility beyond the lowest, simplest of content.

I can't think of any game with significant higher-end group content that has adequately mitigated the crummy part of having to find and form a group. Having that content is fun, but it's hard to avoid the inherent negatives.

So the next time someone tries to tell you that LFG was a thing of the past, remember it's alive and well in even the most accessible MMOs.