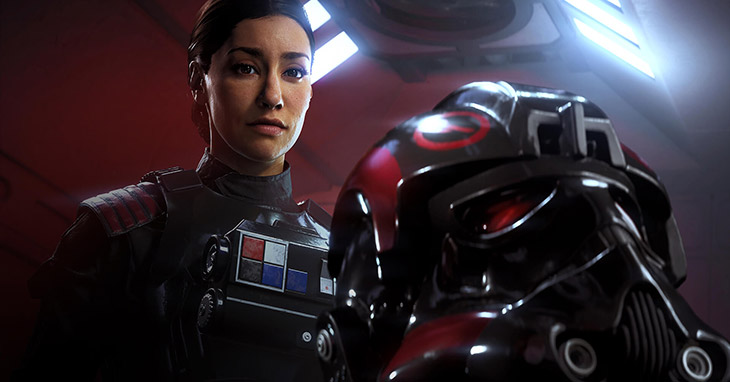 I just finished up the single-player campaign for Battlefront 2, and I must admit I am pleasantly surprised. I heard the campaign was good, and the ending very satisfying, but I wasn't prepared for just how much I would enjoy it.

This writeup will contain spoilers. I really can't justify writing about it without discussing some of the details. If you haven't played and you plan to, or want to avoid certain spoilers from the movies, probably best so stop reading here.

Gist of the Main Story

You're Iden Versio (for most of the campaign), but will dabble as other characters such as Luke Skywalker, Leia, and Han. Iden is the leader of an Empire special forces group called Inferno Squad that quickly finds itself on the losing side after the Battle of Endor. If Inferno Squad was canon sooner, the Empire may not have lost.

Trying to piece together how they could have lost, Iden finds herself quickly realizing this isn't the Empire she thought she was fighting for all her life. One of her squad members comes to this realization even before she does by a chance encounter on Pillio (see below) where he realizes the Jedi aren't the enemies he was trained to believe.

Iden and Del defect to the Rebel Alliance, and from there work to bring down the Empire in the wake of the Emperor's death.

Overall, a very well-crafted story that never felt slow for me, and lasted about 6 hours of gameplay.

The story comes to a climactic end on Jakku where the last remnants of the Empire are taken out, including Iden's father who is one of the remaining Admirals of the fleet.

The Canon from Battlefront 2 & Story Revelations

The story spans from the end of Return of the Jedi and into The Last Jedi, and fills in many of the never-explained gaps between stories.

Battlefront 2's campaign highlights a lot of the empire's fall prior to the events in The Force Awakens, and part of how the First Order begins to take shape. It also shows some of the events between RotJ and FA for Han Solo, Luke Skywalker, and a few new characters we meet along the way.

Suffice it to say, these are details I hadn't known prior to playing, but I also haven't read any comics or books. Some of the main points you learn surround the planet Pillio and Luke finding the compass the leads him to Ahch-to (the planet he's standing on at the end of Force Awakens).

And don't say I didn't warn you, but we learn (potentially) that the main characters from the single-player are actually Rey's parents. Iden Versio and Del are seen having a romantic relationship at the end of the game, and Del is tortured later by Kylo Ren to know more about the compass and Luke's whereabouts.

Janina Gavankar, as cringe-worthy as it was to watch her at E3, ended up delivering a phenomenal performance as Iden Versio.

Her character was really well developed, and I could really feel the struggle her character had when defecting to the Alliance.

I really enjoyed playing the female antagonist-turned-protagonist a lot more than other female characters in Star Wars. Rey feels forced to me, and Leia never that interesting, but Iden was really cool -- strong, a little edgy, and full of character. Gameplay - Is it any good?

So the story and the characters were great, what about the gameplay?

Right from the start you'll notice that this game could have gone a very different approach as a more stealthy, almost Assassin's Creed style. Throughout the game you'll sneak around and take out enemies by stealth. You'll also do plenty of run and gun too -- even entirely if you desire.

Iden's droid also serves a purpose throughout the game, acting as a shock weapon or slicer. He (it?) is totally cooler than BB8.

There are plenty of opportunities to pilot ships, take control of AT-AT guns, blow things up, and do all the Star Wars-y stuff you would come to expect.

One critique I have about the single-player is the use of the star cards. I feel like they were tacked on and didn't have much place. You'd occasionally find crates to slice that would unlock new abilities, but most just let you swap cards. It could have done without these.

Otherwise, my experience was pretty seamless other than, honestly, having to turn down the difficulty because it was a challenge for me.

Perhaps the glue that ties the entire game together is its fan servicing Star Wars theme. Without Star Wars, this would have been fairly lackluster. That said, it IS Star Wars, so we'll judge it for what it is, and not what it could have been.

There's so much Star Wars jammed into one game. From Luke Skywalker to Kylo Ren, Star Destroyers flying overhead, dog fights in X-Wings, piloting AT-ATs, visiting places like Naboo and Endor, and of course Lando Calrissian.

Toward the end of the game, the level of detail and "omg there's so much Star Wars all around me I can't take it!" kicked into overdrive.

Overall, a phenomenal story with a very, very memorable character who may find herself a crucial figure in the coming films. Regardless of whether the theory is true, she has earned a spot in the Star Wars mythos for her role.

I think the gameplay is good, particularly the stealthy gameplay which can and very well should get its own game dedicated to this type of stealth Star Wars spec-ops.

Coming in at just about 6 hours (including lots of cutscenes), I wish the game were longer, but hope to see more released in the coming DLC (which will be free, btw) in December.

While I can't say it's worth buying Battlefront 2 just for this short story, those who did should absolutely play through it.