Sorry for how horribly slow things have been around here. It’s really a mixture of a few things:

(1) I’m really ramping up my other websites and those businesses. Making money is kinda fun.

For one of my businesses I’m consulting for small companies and business others to help them understand how they can market themselves better online. In many cases I end up doing the work for them, and I collect a monthly retainer as their consultant. Pretty fun stuff.

The other two businesses are polar opposites of each other. One is generating passive income, but taking a ton of time to ramp up. The other takes a ton of active participation but actually does incredibly wellÂ financially — I just can’t scale it. So I’m spending time working on those. In a way it almost feels like I’m playing a RL MMO.

(2) MMOs are a huge part of my regular commentary, and MMOs are in a bit of a recession. This is the ‘crash’ I predicted a few years ago when I (along with many others — I don’t want to pretend I’m special for seeing this coming) saw the industry speeding off in a direction toward F2P and garbageware me-too themepark games.

We still have the steady few:

I’m looking at the MMO list lately of games coming out… we’re in a bit of trouble if this is the hype list on MMORPG.com: 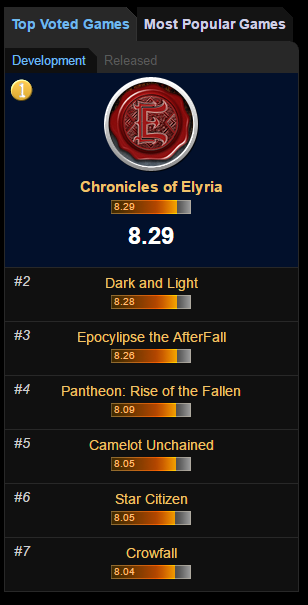 Crowfall has Wildstar written all over it. Pantheon is DoA but somehow making headlines. Chronicles of Elyria is ambitious, but low-budget. Star Citizen is already playable in some form, but sort of a ‘womp womp’ experience. Epocylipse the AfterFall and Dark And Light?Â Who? What? Camelot Unchained is the only game even on a 3 year horizon that looks good to me.

I’m playing a lot of Pokemon, Kingdom Hearts HD 1.5 Remix (currently on RE:CoM), BF1, and of course WoW to fill that void of having no MMO. Time to settle in, because this might be a long, long recession before someone makes something worth dedicating any serious amount of attention.

So while the MMO scene is a real hoot, I’m actually having fun playing games. I am in no way hurting for something to play, which is a massive departure from the days between MMOs when staring at a blank wall was the alternative.