Pokemon Go is all the craze lately. People everyone are playing. People who would never have even thought to play a Pokemon game are walking the streets hunting for Pokemon. I was at work and looked out the window down to the street and sure enough this lady was catching Pokemon. How do you know if someone is playing? Just watch. They’ll act really odd, aiming their phone around, spinning in circle, then suddenly stopping for no apparent reason to interact with their phone.

I went Pokemon hunting yesterday. I was on my way to a wedding with a little time to kill so my wife and I stopped off at the mall (Irvine Spectrum for people who know the area) when suddenly a wild Zubat appeared! I chased it into a Target. Then I had to take a detour into a jewelry store to catch an Ekans. Pics or it didn’t happen? Sure.

Throughout the mall I caught a dozen or so others. I went into a Sur la Table and found a Pidgey fluttering around some spatulas. Then wild Ratata appeared at the Starbucks, and a Crabby was just chillin on some lady’s purse. I had to stop and aim my phone at her — not awkward at all.

I saw several other people catching Pokemon around me. One guy in a Curse gaming shirt was having a grand ole time, and these two teenagers were running around clearly chasing Pokemon.

An interesting feature are the PokeStops. Real world ‘places of interest’ are turned into PokeStops, or places that you can visit to get bonuses like PokeBalls. These have so far been everything from the water fountain at the mall to the tile art on the archway in my complex. The more populated the area, the more PokeStops — it’s like they want people to see you playing or something. ::Looks around nervously:: 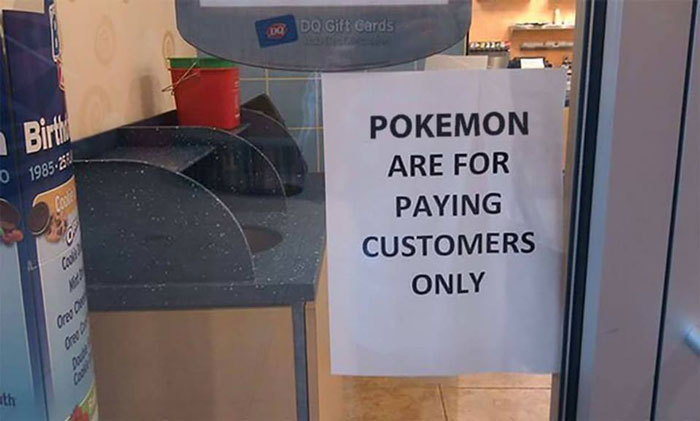 I’m more of a closet Poke Trainer… I get all shy and embarassed aiming my phone around. Bri gets excited and starts shouting “THERE’S ONE! CATCH IT!” and I’m like “SHHH” and IÂ hide my phone andÂ start examining the basting brushes like nothing is going on.

Pokemon Go lacks the “game” element for me. It’s a neat gimmick to use your phone camera to see pokemon in the world, but just flicking pokeballs and having it be nothing more than ‘collect’em all’ gets old. I want to battle them. I want to level them up. I want to do more of the actual Pokemon game. I get it — that’s not what Pokemon Go is about. Pokemon go is about getting random people out catching Pokemon

By the end of the afternoon I had walked just over three miles finding Pokemon. I’m already a bit bored with the whole experience. Come to think of it, that’s what Pokemon Go is all about. It’s not a game. It’s an experience. It’s a fun social experiment to see how new ways of engaging people beyond the usual gamer can catch on. Give it a shot — it’s free. Just don’t let your kids walk into the middle of the street chasing after a Pikachu.