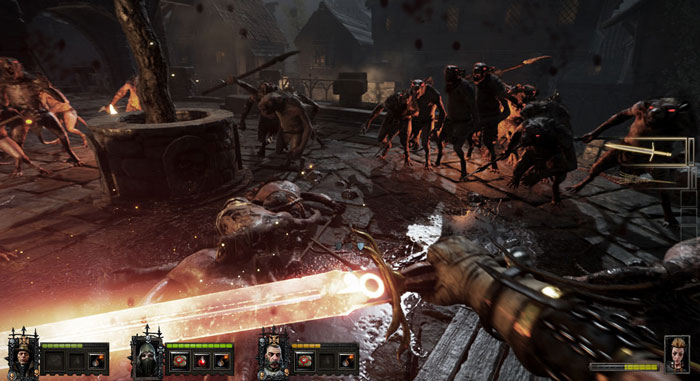 Steam had a free weekend for Warhammer Vermintide, so Graev and I gave it a shot. Turned out to be a lot of fun! Vermintide is like Left 4 Dead in a Warhammer setting. In fact… it’s pretty much a straight ripoff with a few added features. That’s not a bad thing, but it gives you an idea of the style of gameplay you can expect. There’s also this weird Warhammer Online vibe to some of the game, but that’s not necessarily founded on anything other than a “woah this feels like L4D meets WAR”Â feeling which is most likely driven by the setting.

Just like L4D, Vermintide is a co-op survival game with five heroes straight from the Warhammer setting, eat with their own unique loot and style of play.Â One of the key differences I see between the two games is that you can progress your character and obtain loot. Loot can be upgraded, has varying degrees of rarity, and modestly alters the way a character plays. Instead of undead and zombies, you’re escaping from the Skaven.

The Skaven comes in waves and attack you while your team of five tries to get to the objective — again, the more you think L4D the more you’ll completely get what I’m trying to explain. There’s an assassin Skavin who jumps on you and slices at you, pinning you to the ground; a Skaven that ropes you and pulls you toward him incapacitating you until you are freed; a suicidal poison skaven guy who will quickly make seeing impossible… need I go on? They’re cool, though, and they do fit the lore completely.

Vermintide is brutally hard. We struggled to not only find our way a few times, but the waves of Skaven and requirements to play really well as a team made for more than a few game overs. I like that though, and can’t imagine wanting it to be any easier. If it were any easier (even on normal difficulty) then the game would be over quickly and have almost no replay value. I didn’t find much replay value in L4D’s campaign either. In my opinion, that’s the downside of these games. They’re great fun for the first play-through, and maybe a subsequent one or two, but you can quickly find yourself desensitized to the immersion when you’ve been there and done that.

They do a great job immersing you, though. The setting is beautifully crafted, the Skaven are seemingly intelligent (most of the time), and I like how the characters all play and feel. Melee and ranged combat both work nicely. I like hewing my axe in different directions and watching the rat pieces fly. Sniping as the Waywatcher was also a ton of fun. Oh, and I do also enjoyed the blocking mechanics and how directional dodging and swinging felt useful. Combat is solid.

One critique Graev and I both share is that we don’t understand why they decidedÂ against player-controlled Skaven. That would have been a blast, and helped with replayability. Instead, it’s simply co-op vs. Skaven AI.