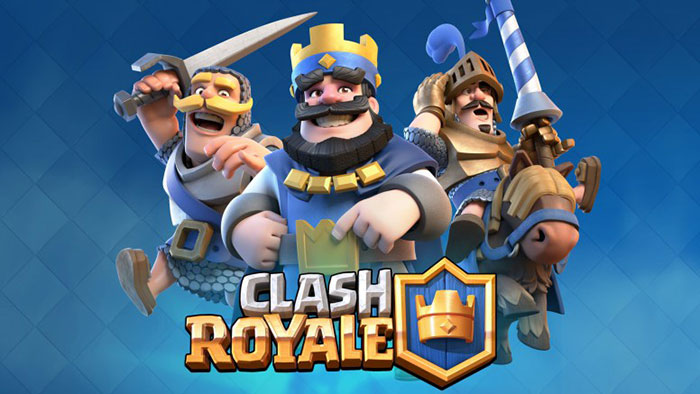 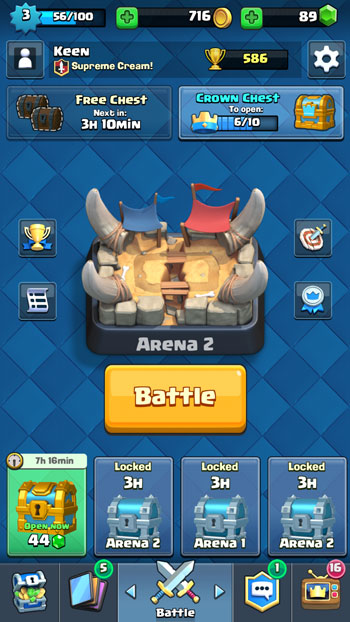 My latest iOS game addiction is Clash Royale by SuperCell. Clash Royale is a real-time 2-3 minute battle game where you are matched up with an opponent and duke it out to see who can destroy the other person’s towersÂ before the time is up. Each player has a deck of ‘cards’ comprising their “Battle Deck.” Your Battle Deck can have up to 8 cards at a time that must be carefully balanced around Elixir Cost and tactics.

During battle you generate Elixir in real time up to a total of 10 Elixir. You can then play cards that cost elixir at any time. Elixir is constantly regenerating, and toward the end of a match (again only 3 minutes long) it will generate even faster. Cards are placed into your hand 4 at a time. As you use a card, a new one comes out of your deck into your hand.

Each “Arena” has two lanes. You and your opponent are positioned on opposite sides. You can drag your units onto the field anywhere except within a radius of enemy towers. Destroying enemy towers means you can put units onto the field on their side of the Arena. Units are pre-programed to simply move toward the enemy base and attack units or towers. Gameplay then becomes about pushing lanes, countering pushes, countering units, and out-thinking or simply out-playing the enemy’s hand. 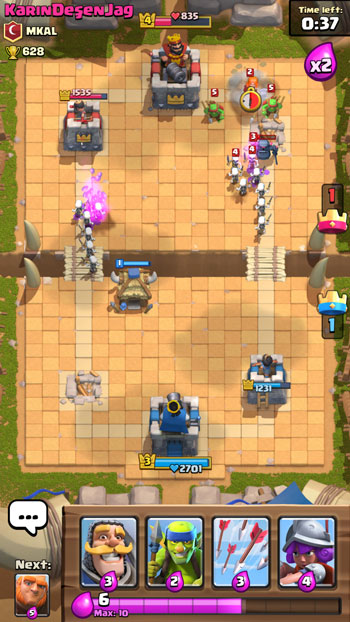 So the gist of the game is very simple. Build a good deck, play cards onto the field by dragging them out of your hand, and outsmart your enemy. There’s a lot more depth here than one might initially think, and as Syncaine points out in his post it’s definitely more than rock, paper, scissors. Units have stats, aoe damage, some generate more units, there’s strategy behind putting a tank ahead of a DPS, and even concepts like blocking and flanking.

Clash Royale is free to play. The cash shop system seems, at least to me thus far, fair enough. You can have up to 4 chests at a timeÂ and be opening one of them at a time. A chest could take 3 hours, 12 hours, etc., based on quality to open up. You can open them immediately by paying gems. Cards can also be purchased with gold which — surprise — can be purchased. I haven’t felt at a disadvantage YET. I imagine the disadvantage will come later when people have cards that are higher level than me because they’ve bought more of that card. I guess that brings up a good point that when you open chests and get more cards, duplicates go towards leveling up your cards. So if I have 1 barbarian card and get two more barbarian cards, the barbarian can be upgraded to level 2 — 4 more upgrades to level 3, etc.

I’m enjoying the simplicity and straight-forward gameplay enough that I enlisted in a Clan. I joinedd up with Syncaine’s “Supreme Cream” group and I’m enjoying myself.

Clash Royale is a fun, high-intensity, deeper than it looks game that you can pick up and play for 3 minutes or 3 hours. Definitely the right price to download and give it a try. I’m struggling to find any flaws with the game other than the principle argument ofÂ whether or not a cash shop is ultimately fair or unfair based on paying to win.