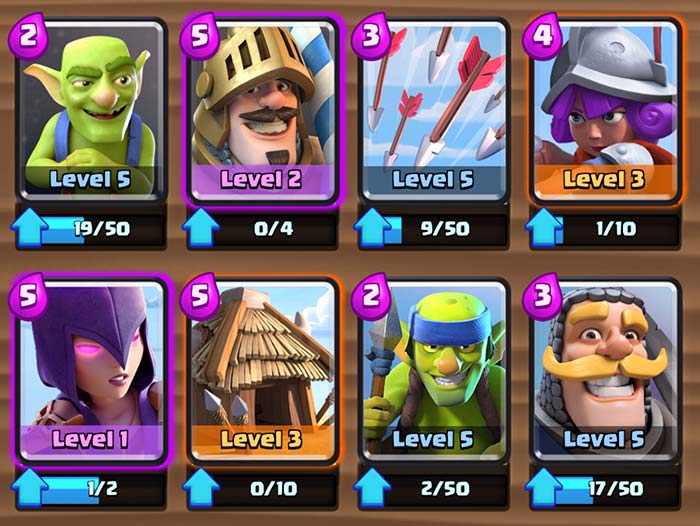 I’m getting better at Clash Royale, but I still have a really long way to go before I feel like I’ll be on the level of some of the guys in my clan. I put in maybe a combined 30 minutes to an hour a day battling my way to victory (or major loss) which doesn’t seem like a lot, but for a game that lasts 3 minutes per battle — and played on my iPhone — that’s pretty good. My biggest struggle has been in finding a good deck that synergizes with the cards I have (and don’t have) as well as counters what is most often used. Here’s what I came up with…

I’m currently in Arena 3. I was one or two matches away from Arena 4 when I went on a massive losing streak all the way back to Arena 2 and had to take a serious moment to stop and rethink what I was doing. I was constantly changing my deck, constantly thinking that every loss meant my deck was flawed. Every adjustment I made, I realize the next deck I fought countered me.

My problem wasn’t exactly in my cards, although they were certainly a component. My strategies were flawed too. I would see the mistakes I was making right as I made them. Every match was a “WHY did I just do that?!” One wrong card placement costs you the match in Clash Royale, and often recovering is only had when the enemy makes a mistake as well.

So anyway, after consulting with my clan mates they gave me some great advice. My deck is pictured above, but I want to go through it and explain how I use some of those cards and the strategies involved.

The key strategy of my deck is to overwhelm BOTH lanes. I start by placing my Witch on one lane at the very back behind my towers. This gives her a chance to summon two skeletons groups by the time she reaches the middle, but also allows me to see how my opponent reacts. If they overcompensate to thwart the Witch, I send my Prince along with a musketeer or spear or anything else to the other side. Chances are I have caught them low on elixir and they not only lose a tower but are stuck on defense the rest of the game.

My deck is also fairly good against air. Muskeeteer takes out balloons with the help of Spear Goblins and the Witch. The Knight is a highly underrated card because he hits well and can really tank nicely — I’ve often had him tank for the prince. Goblins are great to disperse their melee, and Goblin Hut + Spears + Goblins in one lane with Prince or Witch in another is a second great push.

Decks I struggle against usually consist of a good combo of the Baby Dragon and Skeleton Army — I own neither because my luck sucks. I just had to realize that I won’t beat every match up, but on the balance I’m starting to pull ahead with more wins than losses.

I’d love to talk strategies with you guys if any of you play, or bounce ideas for decks off each other. My biggest recommendation would be to think about specific cards that usually lead to your opponent winning, and making sure that you at least counter the majority of them. You can’t counter them all, it simply doesn’t work that way. Find a balance and tactics that work for you and run with them.