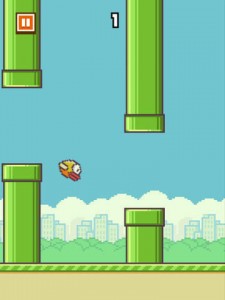 I work in an office of gamers.Â  That is to say, my coworkers play games on their iPhones.Â  Five days ago one of my coworkers recommended I play this “super addicting game” called Flappy Bird.Â  Apparently she gets into a lot of arguments with her casual gamer boyfriend.Â  After witnessing one of their spats, I decided to download it on my lunch break to see what was worth all of the fuss.

You play as a Cheep Cheep rip off who must be guided by your well-timed tapping.Â  By tapping the screen you bounce your big-lipped-ripped-off-art-asset through sets of Mario pipes — more ripped off assets.Â  Since the hit box around the bird is so horribly big, getting anywhere near a pipe kills you instantly.Â  That’s the entire game.Â  See the screenshot to the right?Â  Yep, you’ve seen the entirety of Flappy Bird.

I walked into the break room today during lunch, heard 6 people talking about Flappy Bird, then promptly turned around and walked the other way.Â  My high score is 4.Â  I made it through 4 sets of pipes.Â  How this game — essentially full of asset theft — makes $50,000 a day is beyond my ability to comprehend.Â  Then again, here I am spreading the word to many of you who as a result have already finished your downloads.Â  *Shakes his fist* Flappy Bird!

Then there’s this game or neuroscience thing called Lumosity.Â  Everyone plays it.Â  They love it. All around the office people creepily walk up to you and ask, “Have you tried this great game? You should really try it out.”Â  No! Get away from me!Â  I don’t want your brain sucking game!

Perhaps it’s not quite as addicting as the version which nearly crippled the crew of the Enterprise.Â  My boss is already tired of the mini-games because they never change.Â  If only he knew the depth of the parallels I could draw between his experience and my own deeper more involved gaming experiences.Â  Anyway, in Lumosity you basically keep your brain active by playing games.Â  I do the same thing but in my games I’m an assassin and I stab people; I prefer it over math.