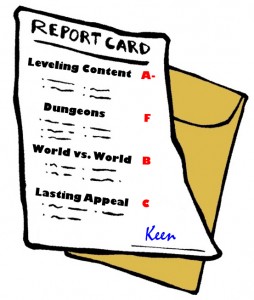 Guild Wars 2 has been out for a month now, and it’s time to really grade the game across the board.Â  Up until now I’ve been able to say “oh well this is a good feature” or “this needs improvement”, but all of those statements aren’t really qualified until put to the test over the coarse of time.

I have put in over 200 hours into Guild Wars 2, reached the top level, obtained almost the “best” gear, and I’ve experienced the game to the point where I feel qualified to grade the game.Â  And that’s a finicky thing to do with an MMO because, more than any game out there, how players feel about the game changes regularly. Reviewing an MMO is an ongoing process.

What use is this to you?Â  Well, if you’re someone who hasn’t purchased Guild Wars 2 then this might be useful in your purchasing decision.Â  We can also use this as a way to look back and discuss the merits of GW2 one month in, and use these metrics to help us figure out what we value most in a MMO, hopefully to help us with future purchases.

You’ll find the grade breakdown after the break.

Fairly standard stuff here.Â  A’s are excellent, C’s average, and F’s mean it should have been left out.

GW2 excels at providing an experience while leveling up where I always feel like, even on alts, I’m not going through the same motions.Â  It feels fresh, non-rigid, and there’s enough content while leveling to go through 2-3 times without ever repeating the same stuff.Â  Leveling is easily the best of what GW2 has to offer.

Maybe some of you finally believe me about the events not being dynamic.Â  All it takes is watching the sea of people standing around waiting for them to start, finishing them in 4 minutes, and waiting for them to respawn to know they are simply ‘events’.Â  So while I downgrade them for that, I have to say they are still a lot of fun overall and certainly above average content.

World vs. World: B

WvW doesn’t have the long-term appeal because it lacks the proper reward structure.Â  I’m not talking about points or a gear grind.Â  WvW needs a dungeon only accessible to the winning side, or something to get people motivated.Â  Simply winning isn’t enough, and losing is like “oh well” to most people.

At first I thought the maps were huge, a godsend to this generation, but the more I play the more I realize it’s not that big, and they should have been a LOT bigger.Â  I think DAOC frontiers were at least 10x the size… maybe more.Â  GW2, while bigger than any other attempt in years, is still not big enough for WvW to function properly.

In other words, WvW is good, but it could have been better.

Dungeons are nearly pointless.Â  The stories are weak, the rewards are inadequate (ArenaNet agrees), and they play extremely wonky at times with bugs and a truly incomplete feel.Â  Dungeons were tacked on to GW2, of that I have no doubt.

Presentation of a MMORPG World: B+

This would have been an easy A if they left out overflow.Â  While not a bad way to implement a lobby system, it still breaks up that contiguous world feel.Â  Tyria in general is large, beautiful, and capable of large expansion.Â  Zones are diverse, and I only felt that a few zones felt alike.Â Â  Teleporters are goofy, and trivialize the size of the world and the ‘presence’ one has in the world.

ArenaNet has, thus far, maintained the integrity of the game’s cash shop.Â  Despite being able to buy gems, and trade gems for gold, there isn’t any sense of game-breaking involvement.Â  To me it feels no different from WoW’s cash shop.

Simply the best node gathering system out there.Â  Crafting is actually useful, and incredibly integrated into the game’s loot system.Â  Crafting is a legitimate way to level up, not entirely a boring plug’n’chug, and a value to the game’s economy.Â  As far as themepark crafting goes, GW2 has the best I’ve played.

Since I coined the phrase “3 monther”, I feel like I can bend the rules a little.Â  Here’s the deal: Guild Wars 2 isn’t a typical 3 monther, but at the same time the game itself may only carry 3 months worth of content (which may even be a little bit generous of me to say).Â  Most 3 monther’s are 3 monther’s because you want to quit by the end.Â  Guild Wars 2 is a 3 monther because I’ll run out of stuff to do.

Leveling was really good, but it goes so quickly — event on alts.Â  Even the truly casual can reach max level in two months.Â  Once max level, you find yourself doing the same stuff you’ve done during those first two months (This is INTENTIONAL), but that means you have little to look forward to, or to actually begin doing, at max level.Â  There simply isn’t enough content in the game to last longer than 3 months.

WvW is the true end-game activity that keeps on giving, but I feel like there is a foreseeable end in sight where I know I’ll say, “Well that was fun, but I’m ready to go do something else.”Â  I haven’t reached that point, but I know myself and I know this game — that point isn’t all that far away.

If ArenaNet releases content regularly, and I truly mean at least once a month to both the WvW and PvE side, then GW2 is not at all a 3 monther.Â  Otherwise, it’s a 3 monther.

Guild Wars 2 is a solid game, a good game, and one worth buying and investing over 200 hours like I have into leveling characters and experiencing Tyria.Â Â  While the leveling and WvW are fun, there are problem areas such as keeping players entertained longer than 3 months, making dungeons actually worth doing, and making WvW more meaningful.

Despite not having enough to keep players engaged as long as I would like, GW2 has the foundation to support building a future worth experiencing.Â Â  Would I recommend GW2 to a friend?Â  Yes.