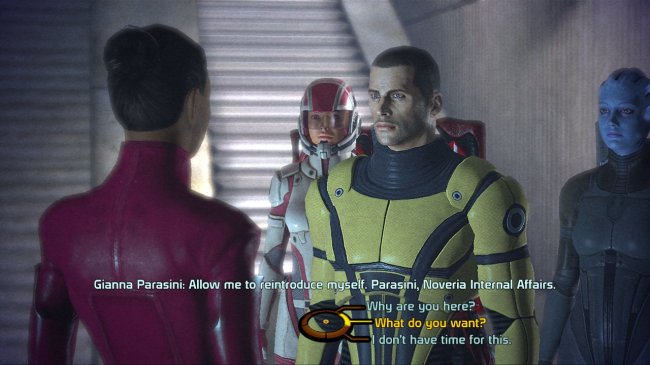 I'm a fan of dialogue trees.  I like when I have the choice of what to say in a RPG, though I know that most of the time the dialogue options have very little, if any, real meaning on the game.

One of the few MMOs to ever do dialogue options was/is SWTOR. In almost every case they were even fully voices. Like most dialogue options, however, they fell into the trappings of being super narrow in scope.

Light Side = Spare or be nice
Sith = Kill or be rude

Typically the outcome of your decision didn't reach beyond that one quest.

ESO has dialogue too, sorta. Maybe more of a faux-alogue tree because their conversation trees represent another side where the options are: (1) The option you're supposed to pick to advance the conversion, (2) the 'tell me more' option or 'small talk', and (3) 'Goodbye'

These motifs are common in games as are others.

In most RPGs -- like Elder Scrolls, Mass Effect, Dragon Age Origins, etc. -- the options tend to be:

When it's so programmatic you really don't even have to think about the choices sometimes. And again, they rarely go beyond the quest or that specific hub or area. I don't like having the choices made so transparent.

Divinity Original Sin is an RPG I can think of that did a nice job with consequences for dialogue trees, and they also did a decent job having multiplayer dialogue options.

In Assassin's Creed Odyssey the quest dialogue options are pretty good. They aren't  prescribed as being good or bad. I like this. In fact, I like it so much that I get super OCD and have no idea how the person I'm talking to will respond. I want to know! So I look it up. To me, that's really cool.

However, Assassin's Creed Odyssey does the other cardinal sin of dialogue trees by having the options not reflect what the characters actually say. I have often chosen to say something because it sounds like a kinder thing to say, but then my character spouts off something snarky or rude and I wish I picked the other option.

A lot of the decisions in AC: Odyssey are also long-reaching into the game's story. If I decline to help someone, or choose not to save someone, or even choose to kill someone or offend them based on dialogue options, then that choice actually comes up later. I've seen massive world-wide ramifications of my choices. Now that's awesome!

I'd love to see the same thing in MMORPGs. That's because I like story with my MMO, and I really like when the world feels connected by choices. Where the challenge comes in is how choices have consequences, and how those would impact the world without immense phasing tech like WoW uses.

I'd like to see dialogue options in a game like Pantheon; something more RPG old school feeling. What I'm trying to get around is my doubt in dialogue working in a game without it feeling like you're 'playing through it' rather than 'living in it'. Dialogue-heavy games are often played 'through' with a start and an end -- the end comes when the dialogue ends. That's something I'd love to get around, but I don't have a solution. Do you?