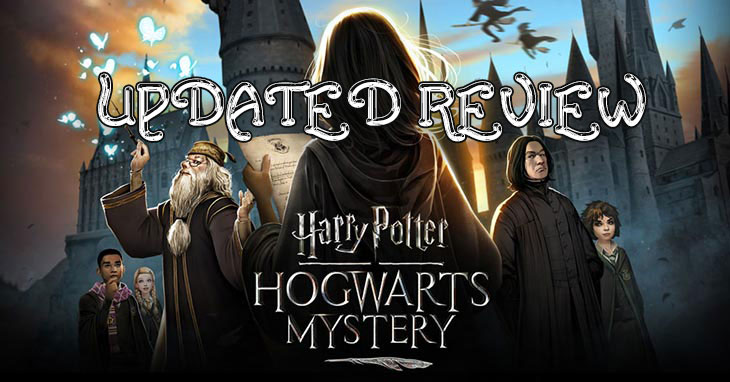 The Harry Potter Hogwarts Mystery game came out for for mobile devices about a month ago. I quit playing within a couple of hours (technically days, but since you can only play for like 10 minutes at a time it spreads out pretty thin).

My wife on the other hand has played the game almost every day since and has tried her darnedest to enjoy the "game" while also not spending any money -- something she does in every single game she plays.

I thought her desire to update her thoughts on the game would have to do with the game being F2P, but it turns out she's quite the critic! There's a whole lot more on her mind.

Here's a link to her original thoughts on the game. She concluded those thoughts by saying...

I'll play out the whole seven years. The only reason I wouldn't is if there continues to be a struggle with generating energy quickly enough to complete the tasks. if the later years are so demanding that I'm forced to either pay money or take the lowest grade reward for completing something, then that may get frustrating. However, at the current rate I think I'll happily play this throughout the whole story.

So... glitchy. Five times! I kid you not, FIVE TIMES! I have booted up the game only to find that the game has stolen my gems to give me energy as though I chose to use the gems -- which I did NOT.

The game spent my gems on energy without my permission. I started up the game to see this.

The developers have said that they won't do anything to correct this kind of "accidental purchase," but come on... five times?!

Something I don't like about the game is how I'm forced to spend in-game gold on things I don't want, which I feel pushes people to want to spend RL money. For example, I was forced to spend gold on "warm clothing" that I didn't want. I had to spend my gold I had been saving in order to advance in the story.

People have tried to say that the use of energy is in multiples of 10 to reach each star, but I haven't found that to be true at all. It may be 9 or 12 or maybe 17, or even 22 energy just to complete one star. This varies depending on the length and nature of the quest, and it doesn't seem to matter what order I choose them in. For instance, if I do "what I think I should", and listen to the professor, or if I do what I was told to do and talk to my friend, or if I try to make it perfectly add up to 10, it doesn't matter.

They've also missed the mark on keeping with the spirit of the Harry Potter world. For instance, the bully in the game is always a Slytherin even if you're a Slytherin. Also, Snape hates you automatically no matter what -- even if you're a Slytherin. These feel like cop outs, but they also diminish what we know about the world and its characters. The developers go out of their way to keep the parallel between the main character (you) and Hagrid liking you, even to the point where he goes out of his way to seek you out in the game and ask for favors because "you're the only one [he] can trust." Final point on this subject, I want to complain about how my Hufflepuff prefect is a real "b" to me sometimes when I don't do what she wants... That is SO un-Hufflepuff-like! (I'm a proud Hufflepuff)

I've slowed down, but I'm still playing. However, I'm only halfway through year 2 and I hear they don't have anything past year 3 yet. At this rate, if I finish year 3 and they still haven't updated, there's a good chance I'll stop playing.