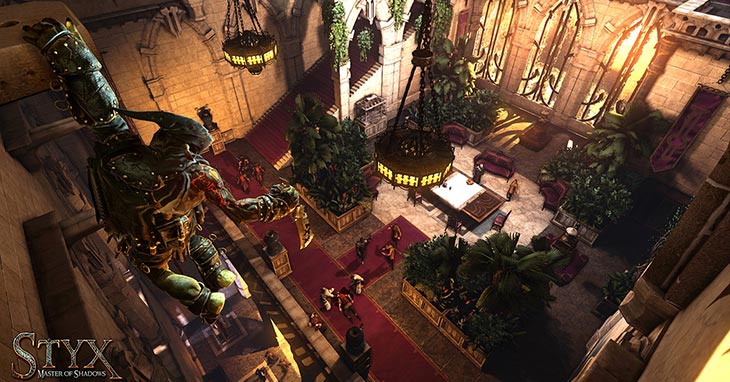 I picked up Styx: Master of Shadows on a Steam sale recently when I had the itch to play a really stealthy game. In my mind I pictured Assassin’s Creed gameplay but from the perspective of a really rough and grumpy goblin. I was not disappointed or wrong in any way.

Styx is a really… personable… goblin who pretty much takes pleasure in killing humans while being sneaky and snarky. His personality is one of the more charming sides of the game. Without the interaction Styx has while talking to himself during a mission and other characters, the game really would be just about a goblin knifing people. His quips and crude humor add a level of personality that I find oddly endearing.

There’s a story mixed in there somewhere, but for the early parts of the game you’re pretty much just knifing humans as you try to figure out why there are voices in your head. Eventually the story unfolds into something a little more compelling, but remains — in my humble opinion — background to the gameplay.

Styx has been given some pretty neat skills because of his exposure to “amber” (which is part of the Tree in the story). The skills at Styx’s disposal are pretty cool. Styx can “clone” himself by barfing up a version of himself that he can then take control of and manipulate the environment or use to “interact” with enemies. Clones themselves can jump on people, flip levers, detonate for a smoke cloud, and all be an all-around asset. They’re perhaps one of the most powerful abilities available. Other skills include invisibility, amber vision (think eagle vision from AC), and

Styx has some neat tools too. You get throwing knives, potions, and sand with spit in it to put out torches. They’re neat, though limited. It all boilers down to your trusty knife. But as a goblin, being so small, you can’t stand to-to-toe with human guards. They’ll pretty much wreck you. Yes, you can parry and counter their attacks to some degree, but when you get detected it’s best to run. I rarely survive actual combat.

Being a small goblin has its advantages you wouldn’t have as a normal sized human. Being able to crawl through small areas, scurry under tables, and otherwise hide behind things that would be too big for an AC character is fun. Several times I’ve had that feeling of being caught just to duck under a table and put out a light fast enough to not be seen.

Guards and other enemies behave predictably, though I like how they something react dynamically to their surroundings. If you put out a light they’ll wonder why it’s out. They’ll notice blood on the floor left by your latest victim, and they’ll react to sounds too. Bumping into a stool or a vase will definitely startle or alert them. Even jumping off heights onto the floor will make sound, but whats neat is that you can jump onto carpet to dampen that sound. For a stealthy game, they definitely hit all those stealthy gameplay points I want.

Difficulty is also pretty legit. I’m trying to avoid save scumming too much, but sometimes that difficulty is obnoxiously hard. I’ve had to load many times to get past certain points. There’s even a harder mode you can enable where you can’t even get into combat all — pretty much a ‘detected and dead’ mode.

Styx: Master of Shadows is regularly on sale on Steam, and you can probably get it bundled with the newest game Styx: Shards of Darkness. Graev and I are playing through the latter co-op while we play through the first game separately (since it has no co-op). I’m giving this my nod of approval. Check it out if you like stealthy games.