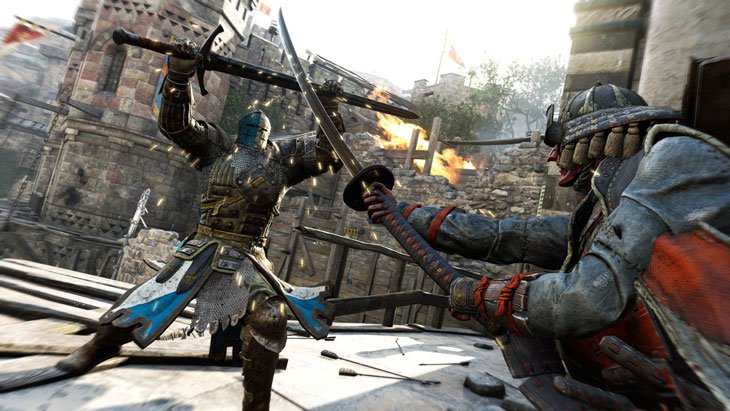 We’re having a lot of fun playing For Honor. Both Graev and I picked it up for PC. We deliberated the pros and cons of the console version vs the PC, and I think we ultimately settled on PC simply because it’s more accessibleÂ for us both to use at certain times of the day. That said, I think both the console and PC versions are great.

For Honor is just like that old game Pirates, Vikings, &Â Knights. Â There are three factions: Vikings, Knights, and Samurai. You get to pick between 4 classes on each faction and then pretty much fight each other to the death in a variety of game modes. In terms of depth… that’s the extent of it. It’s shallow, but that’s sorta the point in a game designed to solely to provide cool fights.

When you first start up the game, you’ll be asked to choose a faction to fight for in the macro campaign. This choice matters very little with respect to your day-to-day play. You can play any faction and class,Â and then simply earn points or “war assets” that you can allocate to the overall campaign. The whole purpose of this campaign faction system is to earn more rewards. You’re allowed to swap factions, but will forfeit rewards of that campaign.

The faction campaigns offer little real gameplay. They’re mostly there for cosmetic reasons since the maps change to match weather and stuff depending on who controls them, and create some micro incentives to care… though I feel this doesn’t translate well at all. Most people are just there to fight in the moment. 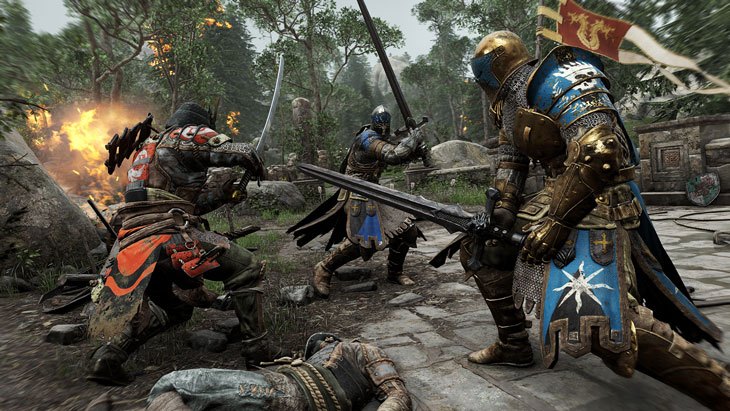 Combat is what For Honor is all about. There’s little else here to examine. Combat is all about choosing a direction to attack, and a direction to block. When you attack an unblocked area, you’ll connect with the opponent. Depending on the class you’re playing, blocking or evading/parrying can lead to combos or other attacks. Every class has different move sets and combinations of abilities. For example, the Samurai Orochi is an agile counter-attacker who wants to parry you and catch you in his combos. The Viking Berserker simply wants to barrage you with attacks hoping you can’t keep up.

Depending on your style, you may find yourself leaning toward offensive play, reactionary play, hybrid, disabler, etc. There are lots of different combat styles to learn here, and some will simply match with your preferences more. They did a nice job making all of them feel ‘good’ in the right hands.

This combat system is incredibly skill-based. Some people will naturally be good at intuitively blocking opponents swinging from one direction, and others (like me) will quickly be flustered when someone is swinging a giant axe in your face.

Practice tends to make perfect in this system, and learning your class’ moves will make a huge difference in how you perform — again, picking a class that matches your natural combat tendencies makes a difference.

A few gripes about this system of combat are the people tend to behave in two ways: (1) They simply run away and you can’t catch them, and (2) You get teamed up on which usually leads to death.

I don’t know why, in the year 2017, Ubisoft went with a peer to peer system. If your NAT isn’t “green” or “open” then you’re in for a world of hurt and long match-making queues. Playing with friends can be a disaster with mismatched NATs. Graev and I spent an hour overcoming errors and getting our NATs both green. It involved portforwarding, windows firewall, and a swear random dumb luck.

Even when you have your NAT situation figured out, you’ll find there are moments of inexplicable waits and random errors kicking you out of queues. I simply don’t understand why they couldn’t have gone with hosted servers.

The maps are nice. I think the details are there, and again this game isn’t about traversing areas or exploring. It about making your blade sink as far as it can into your opponent. It’s about brutal, unrelenting combat. The maps are all small and arena-like.

The modes have slight variety. There are duels, death matches, and capture-the-point modes. Sometimes you’ll have lots of mini-bots (crappy footsoldiers) to wade through, and other times it will just be your main guys — which can (confusingly) still be bots if not enough players connected.

There are two modes I prefer. One is the simple dominion play where you capture the points. I think I like this one because I end up winning more. I find that people tend to ignore the points and try to death match it up. So I run around and gather up the points and win. Duh. The other mode is one where you’re just trying to eliminate the other team. When you die you can only respawn if revived by a team member, so it’s important to guard bodies until they can’t be revived. This mode is best when played with friends.

Overall Thoughts on For Honor

For Honor is a frustratingly rewarding game. If you want a game where you can simply win all the time, stay away. I feel like I die and fail way more than I succeed, but the successes are so psychologically rewarding when you finally DO beat someone in a duel or end up (accidentally) taking on and beating 3 people at once.

The gameplay is shallow in that it’s simply about wacking other people with sharp objects, but you’ll look and feel really cool while doing it. Gameplay modes are simplistic, and the faction campaign is really a non-factor. Look to For Honor as a game about fighting other people in a really well-crafted system of animations and you’ll be happy. Look for much more and it’s simply not there.