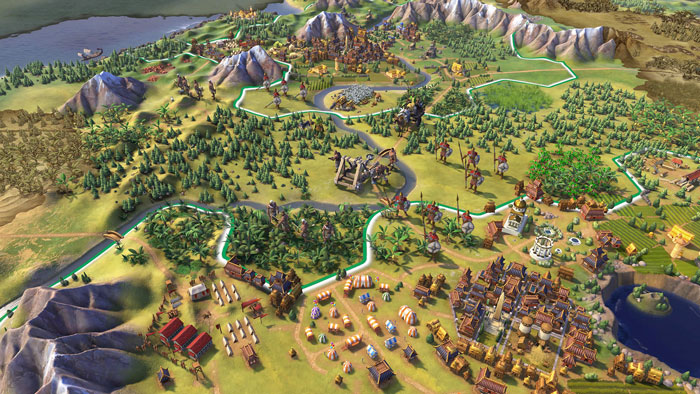 I want to start off this review by saying I’m not an expert at Civilization 6. In fact, quite the opposite. I haven’t “won” a game yet, and I’m still learning how to play Civ 6 having not played a Civ game since Civ 4.Â However, I can talk aboutÂ whether or not I’m having fun or like the game.

Civilization 6 is a turn-based 4x strategy game -Â “eXplore, eXpand, eXploit, and eXterminate.” (Some people have different X’s, but you get the idea). The goal is to take your civilization from an early civilization up through a thriving world power. To win, you have to achieve one of the conditions centralized around military, culture, religion, science, or score based if no other victory conditions are met.

There’s a lot I could say about “how” one plays Civ, but for that I’ll leave you to read the in-depth guides or the videos. Suffice it to say, the game hasÂ subtle complexities that I have come to only learn by experiencing the game myself.

What I like most has to be that no two games of Civ 6 have been alike. I can play a game like Warcraft or Starcraft, and they generally all go the same way — I make the same units, use the same strategies, and generally play the same way on every map. In Civ 6 — albeit a completely different kind of strategy game — I’m rarely going to play the exact same way. The main reason for the diversity and dynamic play has to be the resources and tech tree.

Something I’m still trying to learn to be better at is planning my civilization around what I can access. For example, I thought I’d be super cool and tech fast to munitions only to find out that I had zero niter anywhere near me. Scouting better and actually thinking about requirements for making units would have made this a much easier mistake to avoid.

Civ 6 brings a lot of new features, but the main one for me so far has been the unstacking of cities into districts. Instead of all upgrades going onto jut your main home tile, you now can place districts within your city’s influence. Placing districts on certain tiles yields better results based on that districts requirements — something I’m still trying to be better at. Districts are continually upgraded throughout the game as you unlock more technology and discover new things.

Adapting to random circumstances has also proven challenging. For example, I started my last game next to FOUR barbarian outposts. For the entire first 100 turns I was living by a thread as I was continually assaulted from all sides and surrounded by barbarians. I couldn’t even make a builder because they were captured instantaneously. 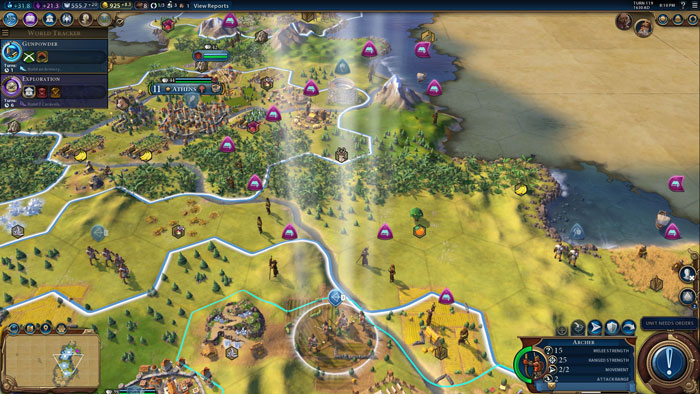 Different world leaders also present some fun. Just when you think you caught a break by being neighbors with the peaceful Gandhi… he suddenly starts converting your people to his religion with dozens upon dozens of missionaries.Â And while you try and deal with stopping him without starting a holy war, Greece offers to send a peaceful “gift” and “delegation” to your capital — YEAH RIGHT.

Military gameplay has also been different. Units do not stack until much later, and even then stack less than normal. This has required a lot more thought into how I move my units across a map, and managing the units has become a lot more challenging. Military gameplay in general is something I’m also working on — especially when it comes to sieging cities with walls in the mid-late game.

Playing for a military victory feels really, really cumbersome and even a bit annoying. Perhaps it’s mean to mimic the complexities of supporting and maneuvering large forces, but it teeters on being obnoxious at times waiting for units to unintelligently move to open hexes if another becomes inadvertently filled.

Multiplayer gameplay is pretty neat. Graev and I have a game going right now where we enabled simultaneous turns. The only real downside to multiplayer is that you may end up waiting a while before that player finishes their turn, and you both can start a new turn. I feel like it has almost doubled the length of the game, even with simultaneous turns enabled.

Overall, Civ 6 is a lot of fun, but you can’t go into this expecting a super high-velocity city conquering game. Civ 6, like its predecessors before it, is a methodical strategy game. You’ll need to plan ahead, take your time, and realize what type of victory is within your reach — and do it pretty early. On more than one occasion, I’ve realized (1-2 hours into a game) that I really can’t win. While that’s not a fun realization, I still had fun getting to to that loss.