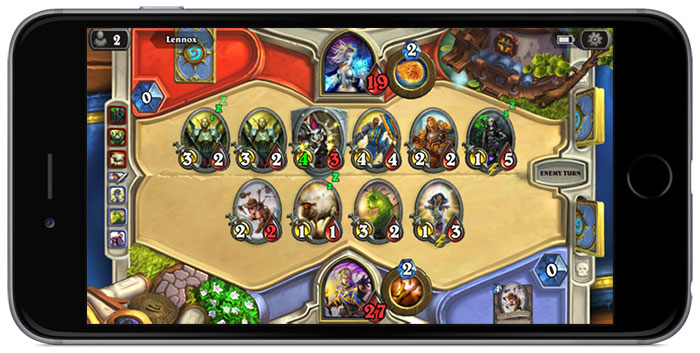 Hearthstone released for the iPhone just a couple of days ago, and I’ve already clocked 5+ hours…. all of which may or may not have been during the work day. I’ll be the first to admit that I am not great at Hearthstone. It’s not the deepest or most difficult to understand or even master card game out there, and like all card games you are only as good as the cards in your deck. Since I haven’t been into the idea of playing a lot of Hearthstone on my PC, as I’d rather play on the go, I’ve held off playing and thus haven’t earned cards. So take this review for what it’s worth — not that of a Hearthstone master, but rather an iPhone 6 Plus gaming enthusiast and still a fan of the game.

Hearthstone on my iPhone 6 Plus runs well enough. I have moment of slow-down, and loading times aren’t fantastic. These feel like something that I bet will be patched within a couple of weeks. This delay and often finicky nature of the touch controls has lead to more than one mistaken selection or card placement resulting in my utter defeat. The image above is actually of a match I was playing today. I mistakenly healedÂ myself because the touch control let go when IÂ was dragging it to my minion.

Blizzard’s implemented of the game on the iPhone does, overall, work. A few extra steps like having to click on my hand to bring it up, and touching to hold cards to see what they do adds to the time it takes me to execute my turn, but over time as I learn cards these will be less of an issue. The extra steps are a little annoying, but at the same time I’m willing to put up with them having Hearthstone in my pocket where I go.

What I love most about this whole thing is how integrated the Battle.net experience is, and the fact that I am playing on my phone with people on their computers, tablets, or phones. I have full access to my friends list and can chat, see what everyone is up to, and whatever I do on my iPhone is completely linked to my exact same Hearthstone account anywhere else. Wonderful integration that has, thus far, worked flawlessly.

Yeah, Hearthstone isn’t perfect. As a card game you can rip it apart. It’s pay-to-win, governed by incredible meta game, luck., etc… but it’s hard to beat free, and it’s hard to beat having it on my iPhone.Â The pay-to-win aspects are no different than the hundreds I’ve spent on MTG cards. I’m just trying to convince myself that a digital version is essentially the same thing when my brain is telling me it’s not. Bottom line, I have to spend money on cards for Hearthstone to realize its full potential.