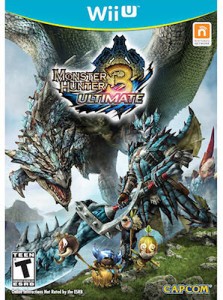 I’m by no means an expert Monster Hunter player but I do like to dabble in the series and find them to often be very enjoyable. Just recently Monster Hunter 3 Ultimate came out for the Wii U (and 3DS), and I’ve been investing most of my spare time into it. The game’s release is a much welcomed sight when you look at the Wii U game drought that trails all the way back to the launch of the system. Up until now the only real use my Wii U has received is for browsing the internet, especially when my computer was borked for a while. Thankfully I now have more reasons to enjoy my Wii U with the addition of Monster Hunter 3 Ultimate, Lego City Undercover, and Zen Pinball 2. Hopefully we start getting a steadier release of games for the system real soon, but back on track…

Monster Hunter 3 Ultimate is an updated version of Monster Hunter Tri, with several new types of monsters, weapons, and content in general.Â  You essentially fight giant monsters, either alone or with friends, and carve up their body parts to make awesome weapons and armor. That’s the gist of the franchise, in case you weren’t aware. There is also a lot of crafting and preparation required for your hunts.Â  You want to make sure you have potions so you need to gather herbs and reagents.Â  You also need food to keep your stamina up, and depending on what weapon type you use you need to make sure you have ammo.Â  You can also stock up on useful tools like traps to help you take out monsters.Â  Upgrading gear in general is also required in order to take out harder monsters.Â  You have to mine different materials, harvest smaller parts from smaller monsters, and overall prepare yourself to be a better hunter.

It can be hard to describe the experience of the game and you really need to try it for yourself. Unfortunately the demo seems to be doing a poor job of portraying the actual game experience, at least according to many fans of the series. My first experience with the series was with the first entry on the PSP. The controls were awful, it was incredibly difficult, and I hated it. I’m actually kind of surprised by the amount of games I initially hate that then go on to be among my favorite games. But yeah, it was rough for me in the beginning and it seems to be that way for a lot of first time players. You just really need to stick with it, though, because it becomes so rewarding when you start engaging some of these awesome creatures and managed to defeat them and craft some gnarly gear.

I haven’t delved into the online experience yet, opting instead to play some single player and get some decent gear. The online component seems like it will be a lot better than the Wii version. I’m not 100% sure, but I think there is voice chat and text chat via the Wii U gamepad.Â  One neat feature is that you can play locally with 3DS players, but I don’t believe you can go online together.Â  If anybody is interested in playing some time my Nintendo Network ID is Graevyard, at least I think it is. Don’t expect a whole lot but I’m always up for a good hunt.

If you like action games with lots of big weapons, huge monsters to kill, and some great character progression then check out Monster Hunter 3 Ultimate.Â  Once I’m much further into the game I’ll fill you all in with my impressions of the content.