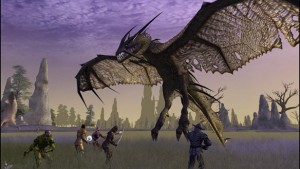 My time in MMORPGs lately has been, admittedly, sporadic and brief. I attribute this mainly to the fact that while the genre continues to grow larger, the games themselves conversely grow smaller in scope. I’m just not interested in online single player games.

So one thing that really irks me is how players are seemingly punished for grouping up. This is a startling trend that has been going on for years now. A new MMORPG would come out and our friends/community would dive in to play. Keen and I are usually fused at the hip when we play a MMORPG together so we are always grouped up. In pretty much every single game the players who soloed would actually outpace us in leveling. Obviously some people would play more than us but even the people who had similar hours would easily out-level us. Everything we kill usually nets us a rather nasty exp split and even games that have supposed “group bonuses” don ‘t end up compensating enough at all.

It’s not a race to the top, at least not for me anymore, but I find this to be incredibly odd and frustrating. Why would we get penalized for grouping together while the players who solo in a massively MULTIPLAYER game have an easier time of it? I don’t know if it’s due to the genre’s paradigm shift towards quest-based leveling or what but it shouldn’t be this way. I’m not saying to get rid of solo content, even though I do think that is a great idea, but soloing really used to be the longer route to greater things but now it seems solo players are basically getting catered to.

How can we solve this? I don’t know. I’m not exactly ‘keen’ when it comes to MMO design but there has to be a way to appease everybody if that is what you really care about doing. I know that I’d be interested if there were lines of “group” quests in games that required at least a few people to participate in. Not just three or four dungeon quests that you grab every 10 levels and group for, but something meatier and interesting that could take the place of traditional quest leveling if you so wanted. Or just return to hunting-based leveling which I find immensely more enjoyable than questing; which to me feels like a never-ending ride on Splash Mountain. Except instead of getting your picture taken during each plummet Br’er Rabbit instead kicks you repeatedly in the groin.