*NOTE* If you at all care about spoilers then you might not want to read this. I'm going to try and be as vague as possible but read at your…

I've been playing a lot of Bravely Default these past few days. So far it has been a very positive experience and is almost certainly the best 3DS RPG I've… 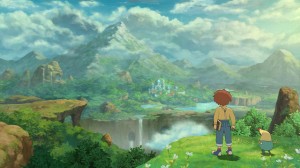 I wasn’t sure that I would be picking up Ni No Kuni: Wrath of the White Witch or not.  It had nothing to do with a lack of interest and everything to do with the fact that I couldn’t get the Wizard’s Edition of the game, which left a rather sour taste in my mouth and a large pit in my stomach. If you don’t really care about any of this then just skip down to my impressions of the game.

I should probably try to explain some things first, at least the best that I can.  Originally Ni no Kuni was a Nintendo DS game, which never left Japan. In it you played a young wizard and utilized the touch screen to draw spell glyphs.  In order to help you with this task each game came with a really neat wizard’s companion book that featured tons of info ranging from spell symbols, familiars, items, alchemy, etc. You pretty much needed to use it all the time.  This concept actually resonated with me rather well. I liked the idea of needing to consult your wizard manifesto in order to learn things and solve puzzles.  It kind of gave me the same vibe I got from old copy-protection manuals for Quest for Glory games. Most people probably didn’t care for that but I really dug it.

Read more for my early impressions of Ni No Kuni: Wrath of the White Witch! END_OF_DOCUMENT_TOKEN_TO_BE_REPLACED

I’ve been wanting to play Xenoblade Chronicles for a long time.  XC is a Japanese game that localized in Europe first since NOE has been localizing more games than NOA.  I modified my Wii to play import games, thinking that would be my only way to actually get to play, but my importing plan fell through.  Luckily, only a few months later the Stateside release was announced and released last Friday.  You can pick up XC from Gamestop (exclusive, which sucks) now! 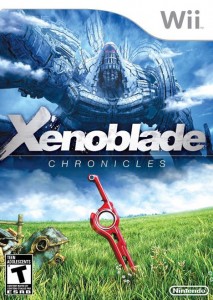 Xenoblade Chronicles has a really interesting game world.  The world, instead of on a traditional planet, is on a vast ocean.  On the ocean are two gigantic mechanical beings with people inhabiting them.  From the perspective of the people, they know they’re on these beings but it looks like a normal planet to them.  It’s like Halo; you think you’re on a planet but you’re not.  The humans (Homs) live on the Bionis, and the machine enemies (Mechons) come from, I think, the other giant entity.  From what I can tell, I think the enemies cross over from the other giant entity to fight.

The story starts out where the Mechons were thought destroyed, but then resurface and attack a village.  The only thing that can harm the Mechons is the Monado Sword, which was originally in the hands of another character that was injured a year previous.  The main character, Shulk, finds that he has the ability to use the Monado Sword and has special abilities that the previous wielder did not have, such as seeing the future.  Now Shulk and his friend are leaving the colony to find the Mechons and get revenge for the death of their friend.

The world feels very large and open.  XC feels a lot like a MMO.  There are NPC’s with side quests that give rewards and experience.  The quests can be to kill certain monsters or find things and bring them back.  You don’t have to do any of these side quests if you want to focus only on the main quest. When fighting monsters, some will BAF (bring a friend, aka they are social).  Like EQ2 had, there are collectibles to find on the ground (glowies) that you can put in a collection book to earn rewards.  Lots of to do. The best way I can describe the feel of the world is an offline MMO.

Some very cool features of the game world are the day night cycle and monsters appearing at only certain times of day.  You can form connections with towns people and really get into the world beyond what you would normally expect in a JRPG.