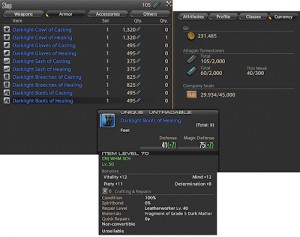 There’s a lot about FFXIV that I like but as time goes on I seem to discover more and more things that are turning me off of the experience. I figured I’d share some brief thoughts on some of the game elements that are starting to bother me.

I love the Dragoon job in FF Tactics games and other FF related titles but Dragoons in FFXIV are really disappointing. They may get three jump attacks but they are all on rather large cooldowns. The main damage one, which doesn’t even do that much damage, is around 40 seconds while the stun is around 90 and the AoE is something like 300 seconds. It’s frustrating that you only get to feel like a Dragoon only some of the time and not even to great effect. The stunning jump just seems completely worthless, too. It has a longer cooldown, does less damage, and takes WAY too much time between activation and execution to actually interrupt anything. I was also really disappointed when I learned that there were no breath attacks at all.Â  I started a Black Mage and I’m having a bit more fun because I feel more like a traditional Black Mage than I ever did a Dragoon.

The job system in general is just really disappointing. Once you actually unlock a job it is little more than a title and quest-line. You are still essentially just your base class except you get a ‘special’ ability every 5 levels. It pretty much makes the addition of more jobs rather unexciting. Like if they added Time Mage or something to Thaum then you are pretty much entirely the same as a Black Mage except you swap out 5 quest-line abilities. I don’t find the idea of that to be appealing at all. They either need to completely re-haul their class system, which they wont, or come up with some kind of advanced job system. END_OF_DOCUMENT_TOKEN_TO_BE_REPLACED

Three days ago Blizzard announced a new raiding difficulty: Flexible Raids.Â  Flexible falls between Looking for Raid and Normal difficulty, and scales depending on the number of players you bring…

I was asked in an email by one of our readers to discuss the term 'Endgame' and why I dislike its use when referring to mmorpgs. First and foremost I…