I kept hearing really good things about the Death Angel card game, especially in terms of solitaire play. I finally got around to picking it up and thought I'd share…

So Keen has been pretty busy lately and hasn't been able to post much at all. He hasn't even gotten any Wildstar impressions up yet and we can't have that.…

Our first foray into the Robinson Crusoe: Adventures on the Cursed Island board game was not so successful. Actually our first several attempts went rather poorly and a few of… 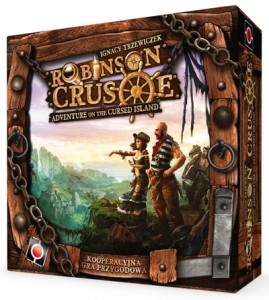 I saw Robinson Crusoe pretty early on when I was initially exploring the board game world. The game has seemed to be very high on ratings list and popularity charts but for some reason I was just turned off by the theme. Still, so many people recommended it and it made top lists for a lot of players. Also it’s supposedly a very good solitaire game. So I decided to look into it more and was actually pretty surprised by the kind of game it is. It seems to be more about the surviving, which has always been appealing to Keen and myself. We loved playing survival games like the Island Troll Tribes custom map in Warcraft III and I suppose it extends out to other games like Minecraft and Rust. Something about just trying to survive really harsh conditions can be a lot of fun.

We picked up the game and so far we have only played about 1 and a half times. The first half game was cut short because we were both pretty sure we were playing it wrong and we were. The second game we did manage to play through the first scenario but we didn’t quite make it. The game is really hard and Keen isn’t entirely sure we’re still playing it right but we both agree that it was still a lot of fun regardless of the poor outcome. END_OF_DOCUMENT_TOKEN_TO_BE_REPLACED

As much as I'm loving my new hobby I have begun to notice several different aspects of playing board games that are starting to irk me. I'm sure some of…

I think I might have gone a little overboard on the board games lately. What started as a passing interest is quickly becoming a full on hobby. Keen and I…

Pathfinder Adventure Card Game was recommended to me by many people over at BoardGameGeek back when I was searching around for some good fantasy games that worked well for 1 player (I had a feeling that I would end up playing most of these by myself). After watching some more videos, includingÂ RickyRoyal‘s again, I decided it was worth picking up the base set.

I have to say that I’m actually pretty impressed by the game box alone. Inside the box you will find all of the cards for the base game but there is tons of space for additional cards that you will eventually add from future adventure packs. There is even space for you to put the little boxes they come in. That kind of foresight is fascinating and makes storing and organizing the game so much easier. Juggling three different boxes for Mage Knight paraphernalia is already getting a little difficult. There’s actually an interesting similarity between the two games, PACG and Mage Knight. They both feature different card types (Weapons, Armor, Items, etc. and Units, Spells, Wounds, and so on) that all share the same background. The difference is that PACG has specific spaces set aside for each card type so that everything stays organized without a real need to modify the storage yourself. With Mage Knight you pretty much clump everything together into one card section, which makes setup and clean up take a lot longer. Perhaps this isn’t really interesting enough to ramble on about, but I really do appreciate the convenience of the PACG box. END_OF_DOCUMENT_TOKEN_TO_BE_REPLACED

Mage Knight is another board game that I got for Christmas but I haven't been able to play it until fairly recently. It's definitely the most complicated board game I've…