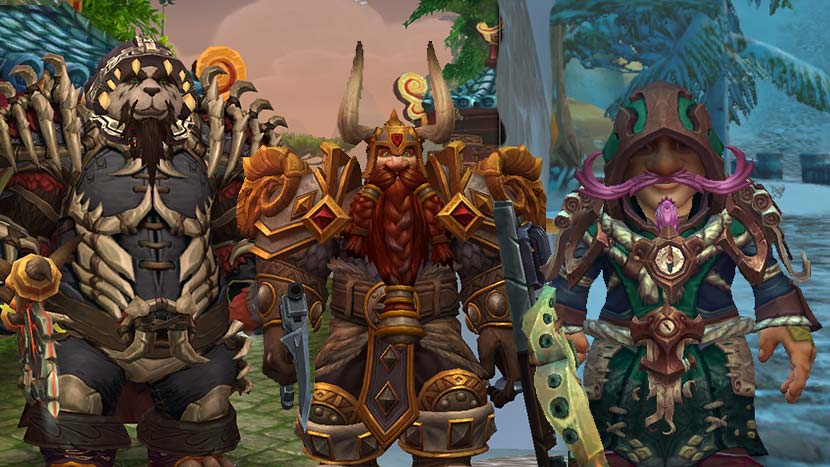 If playing WoW wasn't enough to blow some minds out there, then perhaps looking at the characters I'm playing (and how many) will.

My Roster of Characters in Battle for Azeroth

Even I'm a little shocked at my roster this expansion. Why? Because rarely do I ever even have a SECOND character. Somehow I've managed to seven characters to max level.

Now, not all of them were ever fully geared up and some of them are even retired to the point where I'll probably never play them this xpac. However, I've done a pretty good job.

I'll cover two of my characters for now in this post. I think I'll go into more detail in other posts.

My Monk is my main. For whatever reason, I'm really, really good at it. I can do things with a Mistweaver Monk that I've never been able to do on any other healer. Somehow, I pulls numbers and contribute in ways no one else is able to do. I have achieved some kind of zen harmony with this spec.

Mistweaver have a fantastic lineup of spells for both M+ and raiding. In M+, I can push insane throughput VERY fast onto a group. My healing feels instant. Single-target, my spells feel second to none. I can push a tank to full HP in 2-3 casts. Healing the entire group is easy because I spread a few heals over time and now whenever I heal someone, that heal also adds additional healing onto my other targets. I feel like I can flood the health bars with healing.

Utility on the Mistweaver isn't lacking, either. I have a strong CC to lock down a mob and I also have Ring of Peace which allows me to push to block. Strategically placed, this ring can stop a patrol from moving (and not aggro them) or bump enemies out of helpful mechanics. I can also use RoP to protect someone from being hit (or the entire group) during big waves of enemies.

My Shadow Priest is actually the newest addition to my lineup. I've been 120 for about a week and a half now, and in that time I'm already floating into the ilvls where I won't need much from Heroic BoD. Playing this class has been a real treat because normally I do not like DPS.

Shadow Priest is so diverse, yet so simple to play. I decided to make one when I kept hearing the same line, "Shadow Priest are so boring; Just press a few buttons and win." Sounds good to me! I can't stand overly complicated rotations or having 3-5 hotbars full of keys. I like a very simple caster -- something that has stuck with me since EverQuest.

Shadow Priests remind me a lot of Legion's Affliction Warlock. You dot everything up, then channel. It's a little more complicated than that, but not by much. I like the aspect of dots and dumps. Dot'em all up, dump all the big spells, repeat.

I like how they feel really strong in aoe situations, though not completely bad in single-target. In BFA, it's pretty common to be good at one thing, but the Shadow Priest is strong all around.

Just these past two days I have dabbled into Holy. I did so because everyone said how simple it was, but I find it incredibly complex compared to the Monk. Having to focus on reducing cooldowns by using other abilities, and the number of abilities available were a detractor, but I like how the class feels. It's different, and I've been healing on my Monk now for so long that some change is good for me. More to come on this at another time.

Gearing up & Playing Multiple Characters - How Doable is it in BFA?

Playing multiple characters is much, much easier than it ever was in a comparable time in Legion. Azerite Power was a limiting factor at first, but the past two months it has become really, really easy to get your heart of azeroth leveled to a respectable 40+. You need only do a few of the story missions and run a couple world quests a day to hit that in less than a week. At that point, you're set for unlocking azerite traits on gear. Pushing to 50 is still a grind, but why bother? In a couple more weeks it'll also be easy.

Gearing up isn't so bad. As I mentioned in yesterday's post, you can gear up by doing M+ quite fast. Doing a 10 or higher gives a HUGE sum of Titan Residuum (I'll write about this tomorrrow) that you can save up for just three weeks and then buy a random 415 piece (which, if you're lucky, is enough to never replace until next season.).

You can also run emissaries, which now scale with your level. As of this coming Tuesday, emissaries will scale up to ilvl 400 azerite gear. That's Heroic BoD level!

If you're like me and love to have a diverse portfolio of characters (to fend off boredom or hedge your bets against a patch ruining your main) then you have to agree that BFA has been quite alt friendly.

With that said, time is still the limiting factor. I've chosen to main just my Monk and primary alt my Priest now. The amount of content coming in 8.2 will make playing much more a big, big chore. Stay tuned for my explanation of that this week.