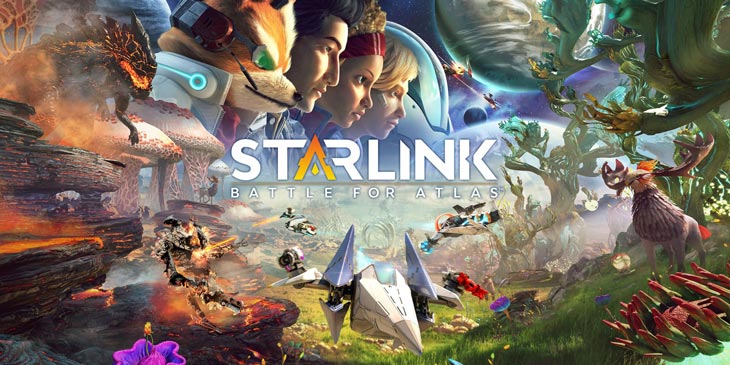 Starlink: Battle for Atlas is Ubisoft's newest game, and the newest (if not last attempt for anyone) toys-to-Life game.

This is my review, which should be taken from the perspective of someone who loves their Nintendo Switch as well as toys-to-life games. You can read through years of Skylanders love, as well as Disney Infinity and LEGO Dimensions.

The Toys-to-Life Component is Great

Starlink does a lot of neat things. The toys are nice quality, and allow you to intermingle the parts so that you can piece together your own personal configurations. There are weapon varieties spanning a few elements which can be attached to various locations on the ships in varying configurations as well. The ship toys are also 100% options, which is a departure from past TTL games. You can go 100% digital and never use a physical toy, or you can scan the toy in and have it register in your game for a period of time. Alternatively, you can go 100% all toys and have at it.

I went with the standard digital edition which comes with a whole lot of stuff you'd otherwise have to buy separately. The value was there for me. Graev went with the deluxe edition, which basically saves you a few bucks but gives you everything available for $20 more.

The 'story' starts out by introducing some epic space adventure where you can play as one of several pilots who have teamed up with this guy named St. Grand to explore the Atlas system and uncover the mysteries of some alien race. It's really built up to be this epic adventure, that quickly devolves.

In the opening cinematic, you're introduced to all the players and your reason for being there. That's when St. Grand is kidnapped and you realized the point of the game isn't to participate in the original idea of the adventure, but instead of rescue St. Grand and fight back the Legion from taking over. I guess that's cool too?

Gameplay is a Repetitive Grind

Here's where the game starts to fall apart for me. Gameplay is far too repetitive. The 'world' (of which there are many worlds, and a star systemed called Atlas), are definitely open for exploration. Fly around, in and out of the atmosphere into space, and back again. That part of the game is fine. What I don't like are the repetitive missions.

Each planet has refineries, observatories, etc. Each of these are no different from the others. You go to one, talk to the NPC who says the same thing each time, and then sends you off to a waypoint to grab something and come back. Rinse repeat ad nauseam.

Early in the game you reach a point where the planets allow you to fight back the Legion. As you defeat their outposts and PoI's on the map, their influence is beaten back. When that's done, it's on the the rest.

Everything about the planets and their missions are identical. Literally everything. It's a pattern of repetition I can't unsee. Thus, I dread going to a new planet. It's a small-ish sphere with the same grind I just finished on the last planet.

Combat and Fighting are Really Cool

Where Starlink shines is in the components of the game that all surround the reptitive mess. Fighting in your ship against other ships, whether on the planet against ground troops or in space in dog fights, is exhilarating. I particularly like fighting enemy space stations.

I love doing barrel rolls, reflecting enemy fire with my shields, and zipping around at hyperspace. Mixing up weapon types to perform elemental effects and other combos is satisfying. Customizing Ships and Weapons with Mods

Pretty much everything you do rewards you with these things called Mods, which are basically stat upgrades and effects you can slot into your weapons and ships. The further you progress, the more you can upgrade these mods from simple grey crap to legendary awesomeness. I like upgrading my stuff. I also like upgrading my pilot by leveling him up (which happens by leveling everything else up).

You can even spend points to upgrade your team's big mothership to provide you with access to more upgrades and abilities. This is all satisfying.

Starlink: Battle for Atlas should be played on the Nintendo Switch -- don't even bother on any other platform. The Switch version comes with Star Fox and a whole Star Fox themed adventure spanning the entire game. There are cutscenes with all of the above mixed in, and the game was clearly built to be a Star Fox tie-in.

Fox McCloud is the pilot I chose. I simply like the flavor he provides, and using his special ability summons the whole gang (Slippy, Peppy, and Falco) to join you.

The Controls Leave Much to be Desired

Whoever's idea it was to map the controls in such a fashion that you have to "claw it" in order to play the game at all should find another form of gainful employment because they suck at controller design. My hands are constantly cramping trying to control my ship in any reasonable way. Being unable to rebind keys is also a crime against humanity in 2018.

Hidden among the repetitive nightmare are some really cool features. Being able to fly in and out of a planet's atmosphere so seamlessly is something few games have ever done. Swapping up ships and configurations on the fly feels awesome, and the toys-to-life component doesn't hinder this game in any way (unlike other TTL's). There are fun moments when you follow the lite-story, but they're too few and far between when the rest of the game is a repetitive grind. If you're un-phased by the repetitive stuff, which personally I struggle with, then there are plenty of great reasons to pick this up.