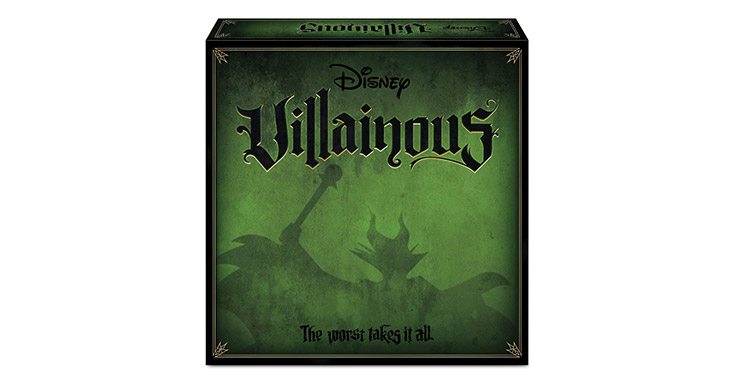 We picked up a really fun board game called Disney Villainous after seeing a few sources we trust commenting about it being fun.

In Disney Villainous you play as iconic villains from the Disney universe (Captain Hook, Ursula, Queen of Hearts, Maleficent, Prince John, and Jafar ) each trying to accomplish their unique villainous objective. Captain Hook has to defeat Peter Pan at the Jolly Roger, Maleficent has to curse her entire realm, etc. These objectives line up nicely with what we know about their personalities and stories from the animated films.

Villainous is unique to me as I haven't played any other game quite like it. You have your villain who has their own realm which contains famous locations from the story. Each turn you move to a different locations which allows you to use different abilities. These abilities are tied to cards or actions which cost power -- a resource you'll want to accumulate throughout the game.

Take a look at the image below.

Notice each location has four abilities for you to play. You can earn power token (like currency), play fate cards on the opponent, move cards, initiate an attack on a hero, discard, etc. When a hero is played on a location, they cover the top two abilities.

We've played as each of the villains already (3 games in 3 nights) and have had an absolute blast. The flavor of the game is so quintessential Disney, and each of the villains has a unique board with unique cards. The Fate cards are so perfectly tuned to combating each villain's objective that it always feels like fate is simply against you. The cards, heroes, and boards are beautifully done. The artwork is straight from the animated films with a unique stylization effect. It's a gorgeous game.

Setup is incredibly simple, which means it's also quick to put away. This is a huge factor for me as I hate long setups.

What I also enjoy is the simplicity. I think anyone 8+ can play and simply follow what the cards say. A little more thought into a move might really thwart the other villains and make the games even more interesting, but isn't required from the whole family to have fun.

The asymmetric gameplay is fun because you aren't playing the same way as your opponent, and it's great fun to learn the strategies for and against each villain.

We highly recommend Disney Villainous to our board game loving readers.