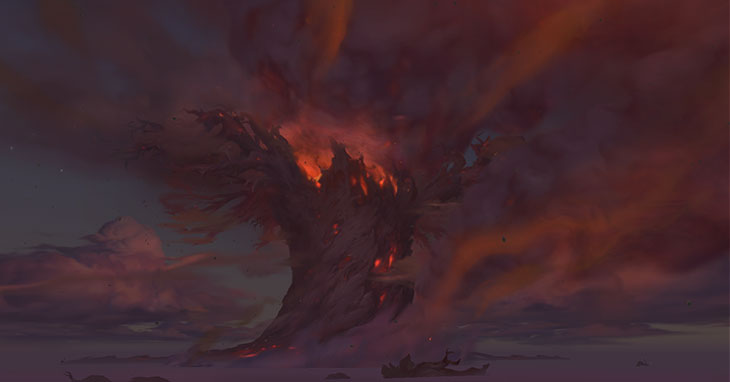 War of the Thorns: Chapter 2 is live today! I was excited for this because I was anxious to get more gameplay.

We knew 'the tree' was going to burn. Teldrassil on fire has been a thing for at least a year for me. I guess what most people didn't know was that Sylvanas was going to be the one to burn it... ? Maybe I was following the story a little closer than most because I had no doubt it was going to be Sylvanas, especially after the ending of Legion where she sort of stepped up at the Warchief. Who else would have been responsible?

From the streams and videos and what I could stomach from Reddit, it appears people were expecting some other big reveal or shocker. Instead, it was just Sylvanas being Sylvanas again. You may recall that I actually like Sylvanas when she's herself.

One of our blog readers and twitter followers, Orrinn, said it well:

I've often felt about Sylvanas the same way I felt about Snape in reading Harry Potter. She's insanely interesting & I can't help but hope there's a redemptive quality there, but she's just SUCH a jerk.

I've seen "weak writing," and "morally grey," thrown around a lot today. I don't think we really have the full story yet. Even Christie Golden, author of many Warcraft novels, had the following to say after being harassed badly on Twitter.

There is so much I cannot answer for you right now! But again I say we have soooo much story to share! Going to take a step back today. â¤ï¸ love you guys, see you tomorrow!

There's more at work here. And if there's not, it's still Sylvanas being Sylvanas in my eyes.

Oh, and please leave people alone. Totally not cool to be mean like that to Christie Golden who I believe has done an excellent job all-around in her novels and story presentation. There are more people working on the story than just Christie. Her classy response made me happy.

Anyway, whether you like the lore or not isn't really for me to persuade, nor will I try. I thought it was fine -- nothing amazing, and certainly not presented well, but story-wise we have just a microscopic viewpoint.

What I'm actually bothered by is the gameplay and presentation. Less than 10 whole minutes of gameplay. I was literally done in 10 minutes. What the heck? The cutscenes, though neatly drawn, weren't cool enough. I wanted cinematics.

I need a WHOLE lot more than what they gave us this week to justify burning Teldrassil. They could have done SO much more than give us just ONE world quest that gives crappy gear. This kinda sucks, Blizzard.

So while the Horde players are having an existential crisis and wondering if they truly are the bad guys in this story, I'm over here wondering WTF I'm going to do for another week with sucky content.