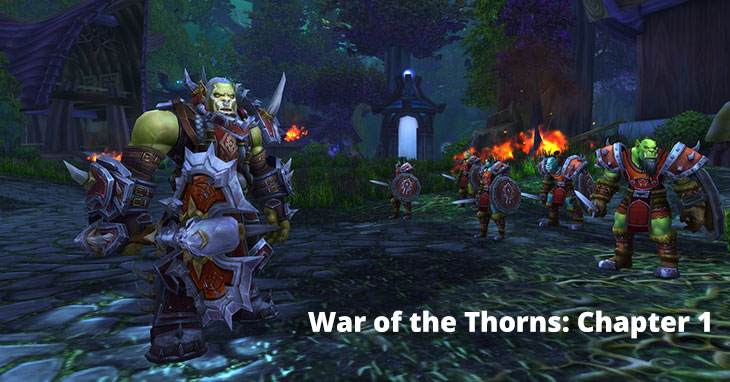 I was able to run through the next phase of WoW's BFA pre-patch content today, and I have a few thoughts on how I would have done things differently.

The BFA pre-patch event has gone for almost two weeks now. Week one was the removal of artifacts, class balance changes, etc. Week two they added the first wave of the quests leading players to Darkshore where the Alliance and Horde are once again fighting each other as the War of the Thorns: Chapter 1.

The video makes it look way cooler than it plays.

Week 2's (Chapter 1's) quests were really lackluster. I was able to go through them in under half an hour. I thought the writing (in terms of the overall story) to be lackluster. There weren't any "woah!" moments in these quests, nor were the objectives interesting at all. Several of them were 'click 7 boxes' or 'kill 10 orcs' or 'gather 6 nodes'. I really felt no hype or significance from them.

When I reached the last quest of this phase, I actually didn't realize it had ended. It was abrupt and didn't really have any "come back next week" notification. It just sort of died mid-thought.

Instead of a big buildup to the expansion, this has been small nuggets of content leaving you feeling ripped off -- not wanting more. The current version felt rushed and underdeveloped.

My Version of the Pre-Patch

I would have made the event all 'live' for at least 3 weeks. This event would have been more of a buildup to the war.

Players would be able to earn currency/commendations for their faction by completing certain objectives: