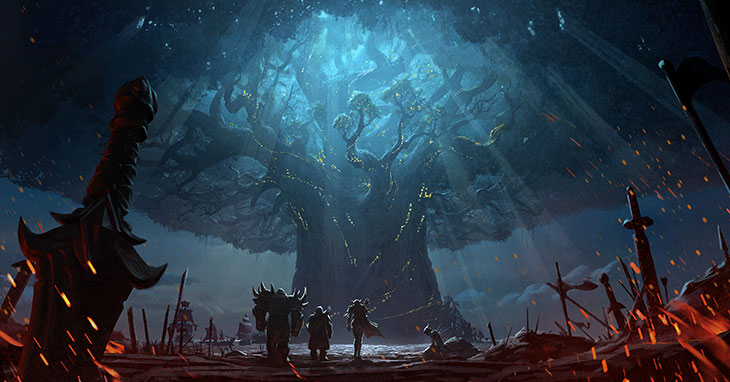 1. I'm eager to see the story move out of Legion. I'm just not a Burning Legion fan, and though the overall story was good in Legion, I'm ready to move on. This feels like forward momentum.

2. I want to get rid of my artifact as fast as possible.

Similar to WoD's squish, health, damage, and stats have been reduced for players and NPCs at (hopefully) a relative scale. Simply put, the numbers will just look smaller but the gameplay will (again, hopefully) feel the same.

In patch 8.0 the last drops of artifact power are all used up to save the world from the big bad wound in Silithas. That means they can no longer be altered with AP. What I'm confused about is whether or not they'll still be usable to fight with as weapons. I'm going to assume they don't just go away, because the video doesn't seem to imply that.

The abilities and gameplay of the artifacts are now incorporated into your character, rather your artifact. This is still confusing.

Anyone know if the actual artifact is going away in Pre-Patch?

Each expansion has its own recipe and category list with its own progression now. You don't have to make past expansion's items to level up -- though I feel like it wasn't that way for quite some time anyway. WoD dealt with much of that.

First Aid is gone entirely, with its skills being split up being Tailors and Alchemists.

The infamous War Mode can now be activated from the talents page.

There's post-season PvP gameplay through the launch of BFA. There won't be any mounts, titles, or Conquest earned during this even, but thee will be "catch-up gear" from strongboxes.

Tensions Grow Between the Alliance and Horde

There's going to be new content coming in the next few weeks that will only be available until the expansion is released. This is similar to just about every other expansion's pre-patch story quests and events.

This is the part I look forward to most.