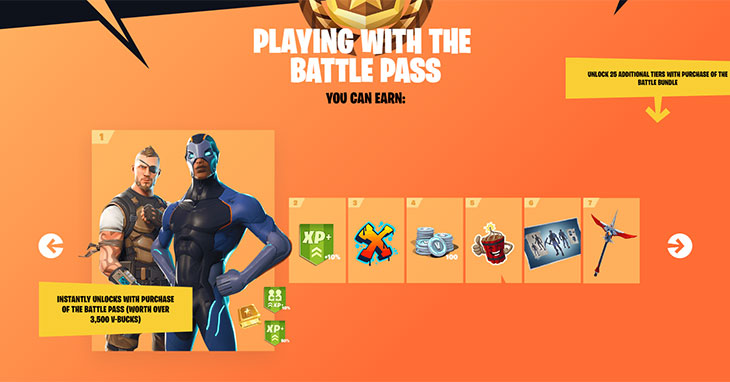 Battle Passes aren't new. There are games like DOTA which have used them since around 2013 -- maybe earlier. Yet in the last month or two they came out of nowhere as the go-to monetization method after loot crates became blasÃ©.

Since developers can't package items in boxes with random drop chances, they've decided to recreate the those punch passes you used to use in some arcades, restaurants, yogurt shops, etc., where you earn more rewards for buying so many foot long sandwiches or making X number of purchases.

The Battle Pass is the gaming industry's version. Most games charge a nominal fee between $9.99 and $15 for a "season" or time period. You buy the pass then play the game and your actions lead to unlocking awards within that season. The more you play, the more you'll probably earn. Fail to unlock those prizes within the season and... well, too bad better luck next time.

When the season is over, it's time to buy the new pass. Catching on to why this is becoming a thing?

While not immediately insidious, there is an element of putting content behind these paywalls I find incredibly sneaky in a brilliant way that I don't enjoy as a consumer but still have to tip my hat.

Every month or "new season" or whatever, there's a new $9.99 carrot. Buy it, or you miss out on all of the cool skins, neat weapons, unlocks, etc., behind it. Sure, you can completely ignore them. I do. I've never purchased a battle pass. But I can't help but feel like I miss out when I don't.

Interestingly, these battle passes co-exist alongside in-game currencies too. Some games are F2P and have a gem system AND a battle pass.

Fascinating how people used to cry foul so ridiculously hard about a simple $14.99 subscription stating gamers simply can't afford it and don't want to pay it when now the data shows people are more than happy to spend WAY more than that.

We've entered the era of the Battle Pass. Yet another explorative (Not a typo, I did not mean exploitative) way of seeing how people will spend money. I hope this alternative turns out better than the past ... well, all of the past monetization ideas this industry has tried to concoct.