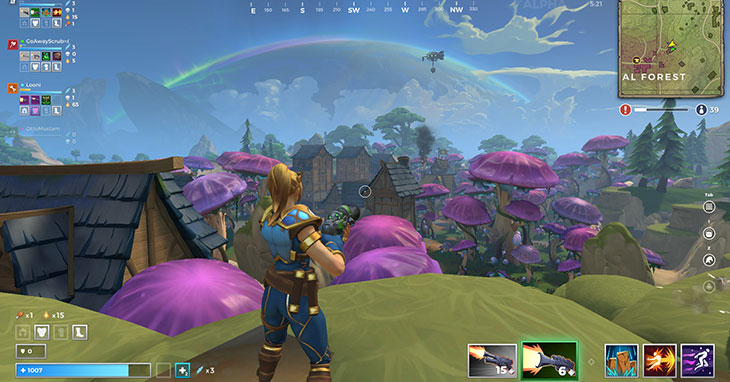 Realm Royale released this week on Steam. I don't know if "released" is the proper terminology for game in "Alpha," but such is the way of gaming these days.

It's entirely a Fortnite clone, though I think they may prefer "Paladins spin-off." It's a battle royale game. It's hugely inspired by Fortnite. While gameplay is almost entirely like Fortnite, there are a few exceptions. Read on, you may be surprised. The setting if you might not have guessed is more of a mystical fantasy world. I find this setting infinitely more enjoyable than Fortnite or its "realistic" counterparts. The world matches that theme with neat fantasy-like biomes. Best BR world I've played yet.

Realm Royale features a class system, though from my limited experience thus far the classes haven't really mattered. They're essentially a choice in a few abilities you get. The Warrior I played leaped, and the Mage could fly. There are also forges spread throughout the map that offer the ability to craft items. I was able to disenchant a few items that I didn't want to loot in order to craft better gear and potions. I thought this was an interesting spin. In addition to the travel mechanics of leaping and flying, etc., there are also mounts. I was able to trot around on a horse, which made the map a little more traverse-able.

The weapon choices are a mixed bag. You get normal guns mixed in with fantasy. I think this is stupid, and would prefer an entirely medieval arsenal of crossbows, bows, swords, etc. Having a rifle and shotgun broke the immersion for me.

I like that there's an armor system and you can equip gear. I found an epic helmet and breastplate, but was sorely disappointed when there was no visible change to my character model. Oh, and there's a chicken mode where if you die you can run around like a ridiculous chicken. If you survive long enough as this chicken you get to respawn where you died. The chicken has to go and be replaced with something more fitting of the fantasy setting. It's still the typical BR clone. You start by dropping in from a zeppelin, the "fog" closes in around you thus closing in the field of play. If those model doesn't appeal, then this game won't either.

Realm Royale is waaaay clunkier than Fortnite and could use a huge amount of polish. It's almost clunky to the point of making it unplayable for people like me who scrutinize how combat and movement feel. Alas, I sucked it up and was able to get first place in my second match. Winning made things a lot more fun. 😉

I'll be nice and forgive some of the clunk since it's an "Alpha." If I had to choose which game to play between this, Fortnite and PUBG, I would choose Realm Royale. I like the setting and the potential. If they manage to slap on some Blizzard-style polish, this would be my BR of choice. Nicely done so far, Hi-Rez.