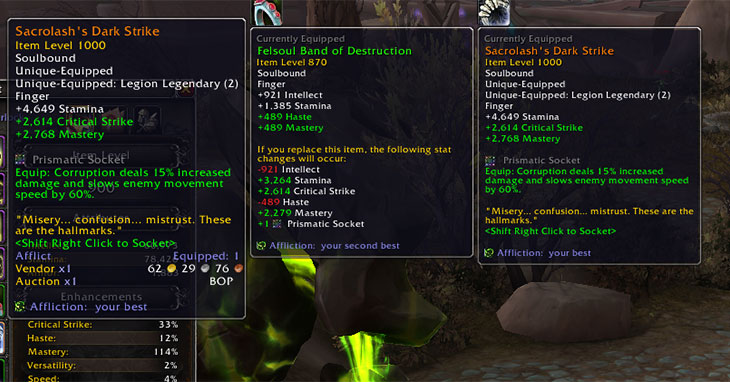 The obvious go-to game for insane stats is World of Warcraft. I'm looking at gear and numbers for just about everything and they've spiraled out of control in Legion. We're doing millions of damage in one ability, getting thousands upon thousands of stats on one piece of gear, and earning billions of points toward an artifact with one consumable. None of those are exaggerations.

Deciding what piece of gear to wear in MMOs these days requires log parsers, ui addons, a calculator, or at least a ton of theory and speculation. Entire websites exist to help people figure out what gear is better. For example, should you use an item with 800 versatility, or 450 crit? Which is better? Why? On what bosses? In which type of encounters? With what buffs?

The entire thing is a little out of control, and it's happening in a lot of MMOs.

Personally, I prefer simpler stats. I get that some companies have taken to naming certain things differently -- coming up with stats like "mastery" and "versatility". I suppose that's fine, as long as those stats are given absolute clarity. Ambiguity is a gateway drug to stat creep.

Simpler stats do not mean simpler combat or boring loot. Epic Sword of Awesomeness can still be amazing with 25 strength and a proc that does 35 fire damage. We don't need a dozen stat modifiers.

In fact, I'm also a believer in simple loot too, but that's a topic for another day.

WoW is being toned down (again) in Battle for Azeroth. It treats the symptoms like it always has, but it never fixes the root cause of the problem.