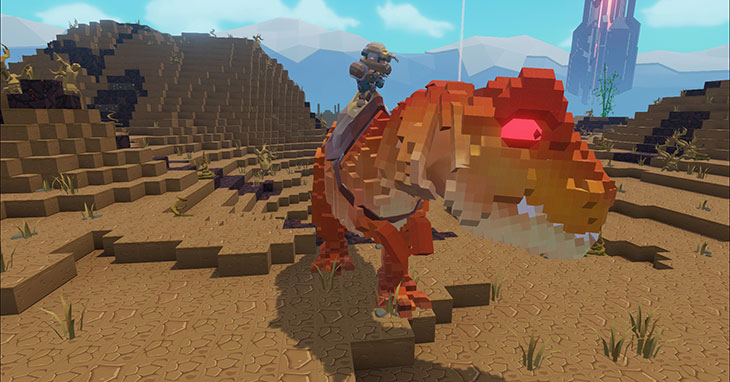 The title of this post pretty much says it all. According to Steam I’ve put in 53 hours into PixARK so far, and it really feels like I haven’t scratched the surface.

Progression was really slow at first. We were surviving (well, mostly) with spears and wood logs. We were running from just about every monster imagineable. Then we started taming some dinos. It started slow with Ptero, which basically allowed us to mow down bunny rabbits. Then it grew to bigger game.

Using our strategy of carrying a player in the Ptero’s claws, we advanced to taming Argentavis. Those bigger birds basically allowed us to protect ourselves against most predators who might wander into our area, but most important to hunt things like Gem Spiders and other monsters in that tier. From there, it was only a few days until we were in the big game.

We eventually figured out you could lure T-Rex into big holes in the ground, then pummel them with sleeping arrows until they passed out. Stuffing their tummies with meat, those T-Rex eventually become your best friend!

Now we’re riding on the backs of T-Rex and plowing through anything that stands in our way — except a few really, really scary baddies.

Our server is now sitting at 18 days played. We’re beginning to outpace our engrams because we’ve had so much fun exploring and hunting. We need to spend some serious time farming resources in order to craft all of the neat building we can make now.

I’m at the point where I can seriously implement electricity and other more industrial-era machinery. It was only a few days ago we were still burning coal in a smelter and drying out our meat with volcanic rocks. Times fly!

I hope to spend some serious time in the next few days retrofitting our base with wiring and a cosmetic overhaul to make it look like more than a box made out of rocks. Plenty more updates on our adventures to come!