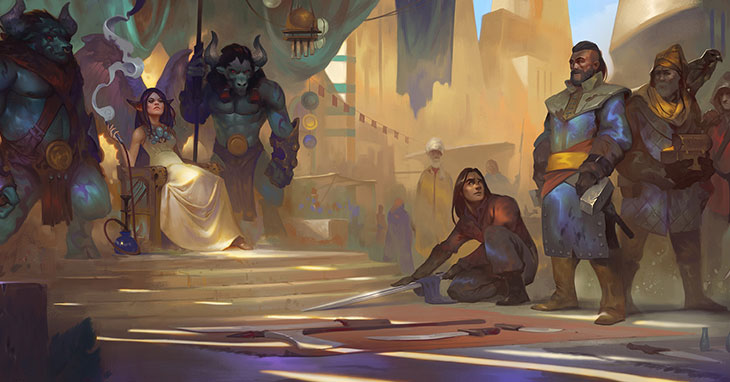 Let's talk about pre-launch hype info for a MMORPG, RPG, or really any type of game. When a game is still some ways from launching, developers tend to start getting into the news cycles by releasing tidbits about lore.

Whether it's a backstory about one of the races, a profile on how a certain enemy came to be, the history of a dungeon, or even a novel about the game world as a whole, there always seems to be some emphasis on lore.

Personally, I really don't respond to it. Do you?

I'm more of a mechanics guy myself. I want to know about the features in an upcoming game. What does the leveling gameplay look like? How will my character progress? Tell me about the social mechanics, or the developers' vision for how some feature -- big or small -- lends itself to creating fun.

Lore is important. Don't get me wrong. Boring or even downright bad stories and lore can make a game immediately feel cheap, so there has to be a minimum viable offering there. But I wouldn't rank lore anywhere near mechanics in terms of important factors that weigh on my decision to play or keep playing a game.â€‹

A clear example of a game with very little apparent or spoon fed lore is EverQuest. While lore is VERY present, it can be 100% ignored and not hinder my gameplay at all.

I think the main reason developers don't talk about more 'meat' early on is fear. They fear the backlash and immediate judgement calls. If someone doesn't like exp loss and you come out with a feature about how your game has exp loss, you've lost that person. If you simply talk about how cold and dangerous the world is because of the mean monsters, but mention nothing about an exp penalty, then you might even get that person to follow the game long enough to like some other feature enough to convince them to purchase.

There's also the desire for relevance and attention -- starting those news cycles builds anticipation... just not for me.

I'm trying to remember if developers ever emphasized substance and mechanics sooner. If there was a time when that happened, I'd call for a return to a discussion on the meat and potatoes of a game sooner than we get it today. I'd certainly have A LOT more to talk about and theorycraft over.