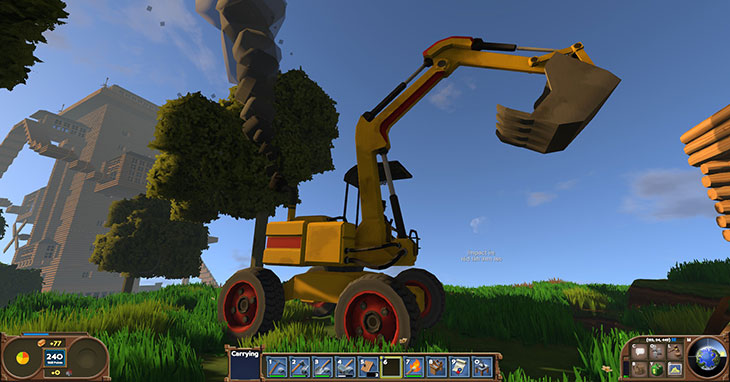 Tonight we officially hit the halfway point on our server! Keentopia has less than 15 days until the meteor strikes!

While some of us are slaving away digging ore and advancing our civilization's technological prowess, others are hard at work making giant wooden monstrosities. They shall remain nameless until such time we can pass a laws against them.

I thought this would be a fitting opportunity to showcase our accomplishments! This is my shop! On the left you see blast furnaces where I smelt all of our server's iron, gold, copper, melty stuff. Those pipes go up through the ceiling and let out all of the smoke from burning the coal.

On the right are the machine shops. Those make things like gears, pistons, etc., that we use in making more complicated projects.

Straight ahead is our electronics assembly where we create circuits, substrates, and other techy things. Many of those are also used in bigger projects. Not visible in this shop is our steel roller and anvil. This room is located adjacent to the shop. This is what I call the "warehouse" since it's such a big room -- the picture doesn't do it justice.

To the left is the oil refinery where we process our raw oil we pump out of the ground into petroleum and other products which are then used to make plastics, epoxy, bio-diesel, etc. It was so big that I had to dig into the ground significantly just to fit it in the room.

The factories (2 of them) ahead and to the right are the highest tier crafting stations in the game and used by the industry specialty to craft things like excavators (as seen in the very top featured image photo), lasers, computer labs, and other items we need to stop the meteor. They're also where we make our lighting and items which use the high-end electricity.

Yep! We now have electricity which is actually providing the lights for these screenshots.

And what's providing the electricity for all of our factories and lighting you ask? Feast your eyes upon our wind generators! These babies crank out the power we need to sustain a thriving power grid in this area of Keentopia.

Tonight we began the final push for our top-tier tech! We began construction on four laser platforms and hopefully before the night is over our computer lab will be constructed as well.

Tomorrow I will break ground on the bunker we'll use to house the lasers and ultimately take out that meteor to save our planet. Such a cool thing to have this imminent threat that we're all working to stop.

So that's all for now! This was a look at the industrial and technological side of Keentopia. There's another side of excavating (blood, sweat, and tears), as well as people focusing on making pretty houses and the aforementioned wooden monstrosities.