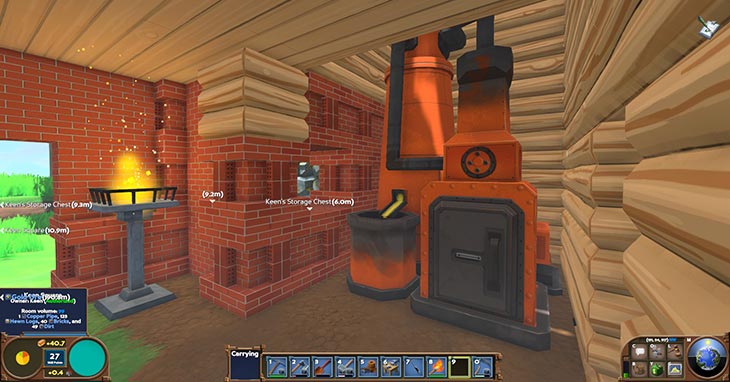 What a blast ECO has been these past four days. Literally.

Today I made a blast furnace which means we can now smelt ores without tillings. Tillings are the waste product of smelting using a blowery, which we have now passed a law to ban.

Using a blast furnace, the only byproduct we have to worry about now is air pollution!

I was super excited last night to place the blast furnace and then tinker with having to make some pipes in order to vent the smoke out of the ceiling.

As we placed it the citizens of our world gathered around to watch the first steps toward a new tomorrow. It took the entire village coming together to make this happen. Raven had to slave away making our bricks, Gringar cloth, Razzmir logs, and me the ingots (and waste product) to build it. Together we watched as we flipped the switch and the smoke began to rise!

It was glorious, and hilarious at the same time to watch this plume of smoke rise up from my little workshop.

We're starting to progress into what's considered "tier 2" materials: Brick, lumber, and glass. Tier 1 was mostly stone and normal logs. Tier 3 introduces more metal substances, and we're a ways off from being there.

Looking ahead, I should be able to begin making simple machines tonight. How we're going to power those, and what surprises crop up to hinder our progress, will all be part of the adventure!