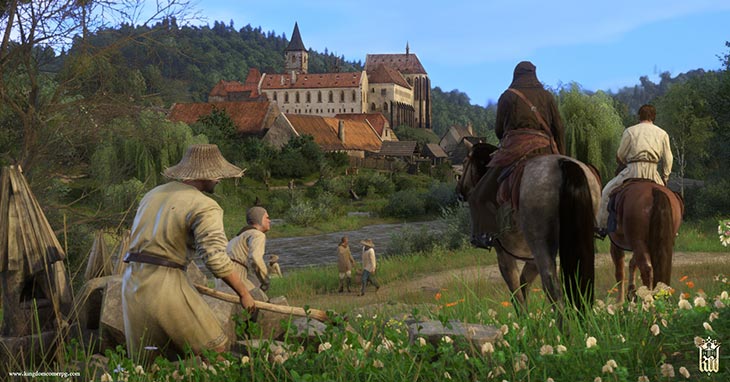 Kingdom Come: Deliverance is one of those games I saw back at an E3 or during some game conference and thought it looked decent, but then forgot about it completely.

They were kickstarted successfully back in 2014 for four times their ask, and were planning to deliver the game much sooner but saw some setbacks. Now the game is coming out February 13, 2018 for PC, Xbox One, and PS4. At its core, KCD looks like an open-world sandbox RPG that doesn't hold your hand. There's a main story there delivered similarly to a game like Oblivion, but completely up to you on how you go about completing it.

A big selling point is how the world adapts to your decisions. I'm curious about the extent of this evolving world. We know that even when your character sleeps the world around you carries on and NPCs do things. Certain NPCs can die, territory struggles ensue, and all sorts of things are all happening in real time behind the scenes while you play out your part of the game. Combat and gameplay are all first person. From what I've seen in videos, the combat looks clunky. It's based on a 5 direction system (up, left right, down left, down right) attack/black system. What hasn't looked good at all is when you make contact in combat things aren't animated well. Doesn't look satisfying to me.

The world is very real. There aren't any fantasy magics, elves, or other high-fantasy themes. This is entirely based on a real-world setting and the medieval drama/politics/aggression of the region.

In general, while very much a 'real RPG', I'm worried about the presentation, but the overall experience may prove enjoyable.

I'll be waiting on reviews to help me decide on this one.