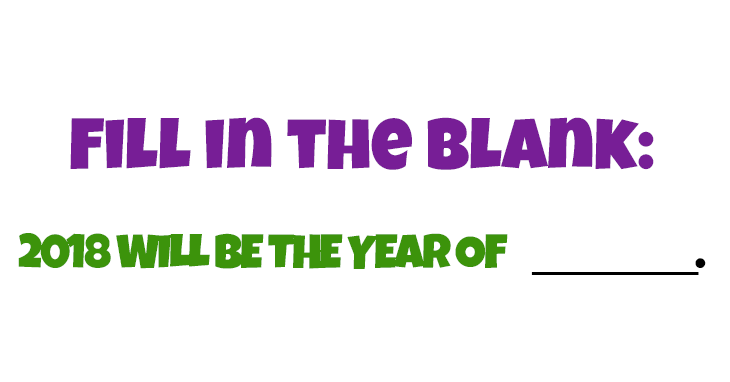 This blog post is an opportunity for us to look forward to 2018 and make a statement, a prediction, a hope, a prayer, a wishful thought, or a jab at what it might become.

I want to hear what you think 2018 will be the year of, but I’ll go ahead and kick things off with a few examples.

Battle Royale
If 2017 taught us anything it’s that Battle Royale is a wildly popular genre. PUBG was up for game of the year and made tons of money, yet it wasn’t even out of early access until yesterday. Fortnite pulled a fast 180 and went from an awful PvE game to a wildly popular Battle Royale rival for PUBG and sparking a ton of controversy over original thought.

If I had to make a guess, I think Blizzard is making a Blizzard Battle Royale game.

Nintendo Switch’s Reign
The Switch has had a blockbuster year in 2017, and I think they’ll keep that momentum going into 2018. I’m betting on a strong Q1, but a slow Q2 & Q3, with a strong finish in Q4. Looking at their Switch games coming out in 2018 list, I think we have a great lineup so far: Kirby, Yoshi, PayDay 2, Wolfenstein, Dragon Quest Builders, etc. Many developers have even expressed a desire to bring their franchises to the Switch.

An Actual MMORPG Release
Did a single MMORPG release in 2017? I guess Albion Online qualifies? I can’t think of any other notable releases this year. That’s really, really sad and saying something. I think 2018 will be the year we actually see an MMORPG release, but I think it’ll be toward the end of the year. I’m predicting Camelot Unchained will release sometime in late Q4. Chalk that up to a lot of wishful thinking. Other than CU, I don’t know of any other MMORPGs on the horizon for 2018.

365 Days of Blogging
Knowing that I have continued to challenge myself to blog every day and succeeded by blogging for 143 days straight has been a huge boost to my confidence and enjoyment of blogging. I know that I will not only hit 365 days partway through the year, but that I will blog every single day of 2018. I always have these grand plans of making more videos and trying “new” things, but for now I’m tabling all those ambitions in order to focus squarely on my goal of purely blogging. If that means more videos, cool. If that means I podcast again, great. If that means I share more adventure logs and game photos, splendid. You guys commenting and engaging with me in discussion in the comments is really a big part of why I share my thoughts publicly — I love interacting with readers.