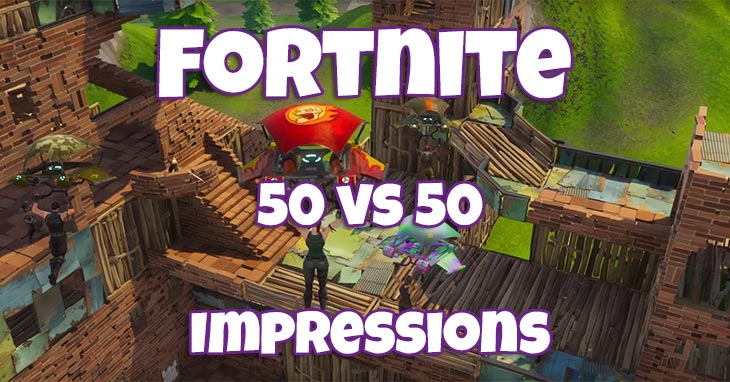 I played the new "temporary" 50 vs. 50 Battle Royale mode tonight.  Before I tell you about my experiences, let me show you how they advertised it during the VGAs.

From the look of it, that's an awesome battle with two big forts and 50 players facing off another 50 in an all-out warfare.

Reality is slightly different and less... cool? But still very much a right way to go for the genre and the game.

In Battle Royale 50v50 you're playing the game 100% exactly like you would in a normal solo queue or squad game. You can fill a squad or not, and get dumped into a game. Where you bail, with or without your team or squad, is entirely up to you. How you guys organize is completely random.

If things happen like my first match, it's just the same mad dash for guns in the beginning, except half the people aren't trying to kill you -- just trying to get the guns first.

If things play out like my second game, eventually when it comes down to 25v25 or so you'll start to see bigger bases build up and the all-out mayhem begins. We won a round I played this evening where both side were racing toward the circle building walls and shooting at each other while we all ran for our lives. It was awesome!

What this mode showed me was that I really think the game needs an almost Battlefield-like mode where there's an area in the middle and the teams spawn on either side. Using building materials and forts you basically have to take over the middle and fight until you accrue points or the last man stands or something. This mode falls a bit flat due to still bailing out of the party bus and having to congregate.

Overall, a very cool mode that I enjoy A LOT more than solo or squad. I have a feeling this 'temporary' mode is here to stay.